The Carnival Corporation is having a pretty lousy January. The largest cruise line owner in the world has been hit with multiple lawsuits over the January 13 sinking of the Costa Concordia and Bahamian authorities are investigating the death of a passenger aboard the Carnival Fantasy.

Six plaintiffs filed the lawsuit and according to Bloomberg it states that they were “in terror of catastrophic injury, death, drowning” and were “placed in a situation where common sense said the vessel was sinking but the orders from the crew were to return to their cabins.” The suit excoriates Carnival over retaining now-infamous Captain Francesco Schettino, noting that Captain Schettino had performed the maneuver that led to the wreck before and that Carnival “breached their duty of care” in allowing him to keep his position.

This is in addition to a separate suit filed two days ago in federal court by a Concordia crew member, Gary Lobaton. Mr. Lobaton is seeking class-action status and up to $100 million in compensation.

The death of the Carnival Fantasy passenger on Friday appeared to be an isolated tragedy but enough to keep the company in ongoing crisis mode:

The 26-year-old victim, whose identity was not released, fell from one of the upper levels of the ship’s atrium to the lobby level late Friday night, Carnival Cruise Lines said in a statement Saturday. The ship was docked in Nassau at the time.

Bahamas police said the man was from South Carolina and that initial reports indicate he may have jumped. He was pronounced dead at the scene.

So times are hard for Carnival, yes, but several thousand recent passengers would say it’s been a much tougher month for them. 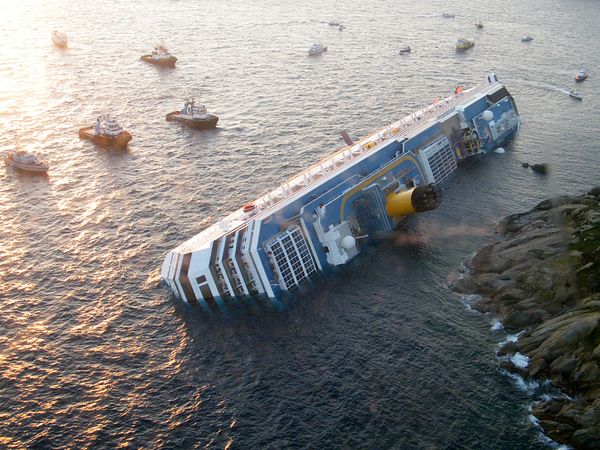