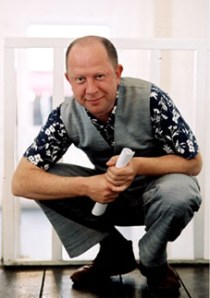 Art Basel released its exhibitor list today, and there is at least one surprise appearance on it: Eigen+Art, the Berlin/Leipzig gallery that was excluded from last year’s fair, causing owner Gerd Harry Lybke to declare, “They messed with the wrong person.” (He also noted that, as a former resident of East Germany, he “faced the Stasi and I’ll face other bad guys.” Wow.)

At the time of his gallery’s exclusion, Mr. Lybke alleged that the selection committee, which featured three members from Berlin, had worked together to cut his gallery out of the fair. Eigen+Art shows artists like Carsten Nicolai, Tim Eitel and Neo Rauch.

It’s like the Cold War thriller out there in Berlin, if some reports are to be believed. Artforum.com’s international digest reported back in September that there was talk in a German paper of an “art cartel” in the city.

“For a long time there wasn’t much to go around in Berlin,” Mr. Lybke, the remarkable quotable dealer, reportedly said. “Now that there’s something, people reveal their true characters.”