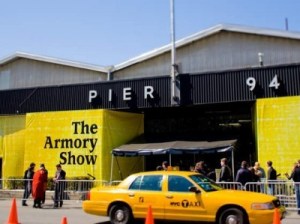 Yesterday, the Armory Show, New York’s 14-year-old annual contemporary art fair, held every March on two piers on the West Side, announced that, as in years past, it would do its annual fundraiser with the Museum of Modern Art. But, as many art world observers noted, there was something missing: the fair had not yet released an exhibitor list. Last year, the list was released on Jan. 11.

The exhibitor list was released to The Observer this morning; it will be made public midday today.

The list, which can be seen in full below, and which covers both Pier 94 (the contemporary art section) and Pier 92 (for modern art) has been reduced by 25 percent, to around 220 from last year’s 274 and that, said fair director Noah Horowitz in a telephone interview this morning, was a conscious choice. He said the aim, with the new design by Brooklyn-based architects Bade Stageberg Cox, was to give the event the feel of “a boutique fair.” (In fact, the Armory has been facing competition in recent years from the Art Show, the annual fair put on concurrently with the Armory by the Art Dealers Association of America (ADAA) and a fair that has a boutique environment by virtue of its space limitations in the Seventh Regiment Armory building on the Upper East Side.)

As can be seen from the list below, the Armory has, predictably, lost some exhibitors to London’s 10-year-old Frieze fair, which makes its New York debut on Randall’s Island in May. Mr. Horowitz attributed this to loyalty that galleries  have shown to the that fair over the years.

But the Armory has at least one big name back on its roster: New York dealer David Zwirner. Last year, critics of the fair pointed out that it had lost two heavy hitters in Zwirner and the Pace Gallery. Mr. Zwirner, who is also exhibiting in the ADAA’s Art Show and Frieze, came back on board, Mr. Horowitz said, after multiple discussions with him. (In this regard, Mr. Horowitz’s former position as director of the online VIP Art Fair seems to have helped him break the ice with dealers.) “We’ve improved outreach to exhibitors who dropped out,” said Mr. Horowitz, who added that he made the argument to Mr. Zwirner that his presence at the Armory, where he will exhibit a new site-specific installation by artist Michael Riedel,  would be “complementary” to his display uptown at the Art Show. “It will be a knockout place to show primary work,” Mr. Horowitz said he told Mr. Zwirner, referring to the segment of the art market that encompasses fresh-from-the-studio work by artists, as opposed to “secondary market,” meaning resale or historical pieces.

Mr. Horowitz has also brought back on board Sprüth Magers, the London-  and Berlin-based gallery that dropped out of the fair over five years ago, and that has since participated in the Independent fair.

Generally, change is afoot at the Armory Show. Booths are bigger, Mr. Horowitz said. Also, there is a clearer floor plan, more social space, better VIP services (including a VIP lounge twice the size as previous years), a proper sit-down restaurant as well as two coffee bar cafes (food services on the piers have been a major source of complaint) and a dedicated space for panel discussions. At the first meeting with the Armory Show, the architects, Mr. Horowitz said, “brought with them the floor plans of every major art fair in the world. They did their homework.” If it is competition from other fairs that has brought about major improvements at New York’s hometown event—competition not just from Frieze and ADAA’s Art Show, but also from the Independent, which runs concurrently with the Armory and has absorbed some of its younger dealers—all the better for the beneficiaries of those improvements: collectors, dealers and the art-interested public.

“Come April, people will reflect and say that the Armory Show is back on track,” Mr. Horowitz said. “I’m optimistic that it will be a success.”

ONE AND J. Gallery, Seoul

Armory Focus: The Nordic Countries is sponsored by the ACE HOTEL NEW YORK.