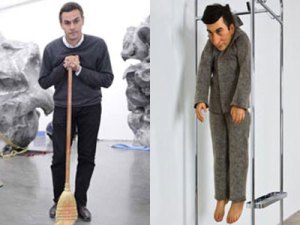 Mr. Gioni and a sculpture of Mr. Cattelan.

The inaugural “Virgin Show” show at Maurizio Cattelan and Massimiliano Gioni’s Family Business exhibition space, will feature Patty Chang, Laurel Nakadate and Mika Rottenberg, among others, according to a press release sent out today by the show’s curator, Marilyn Minter. New York critic Jerry Saltz had a sneak peak at this release for last week, but named none of the artists that will be exhibited.