Politicians can be such buzz-kills. First they petition to take the malt beverage/overly caffeinated Sparks off the shelves, then Four Loko, and now Senator Chuck Schumer is trying to get the FDA to review AeroShot Pure Energy “a breathable caffeine product,” in light of possible safety concerns.

But how bad can inhaler full with 100 mgs of calorie-and-sugar-free caffeine actually be? After distributing the product to four members of The Observer‘s staff, we tipped our heads back and took one for the team to find out.

Currently, two of our four test subjects (including this post’s author) are having mild panic attacks. “I feel like I just inhaled lime-flavored Adderall,” said one participant. “Is my throat swelling up? I feel like my throat is swelling up.” They immediately left the vicinity and haven’t been back since. Another lab rat kept pumping more than one “shot” of the spray into his mouth, because “he wasn’t getting anything.” Three minutes later, soft giggles could be heard from his corner of the office.

“Please put up that clip of Jessie Spano,” he said. We knew exactly which one he was talking about.

The third member of our experiment pumped his shot, made a face, and went back to writing a post…hold on…okay, now he’s on CBS News’ website. Now he’s checking his email. Before that he was on Twitter, we think.

As for ourselves, we seem to have had the worst physical reaction to the latest attempt to appeal to club kids who are allergic to cocaine. We put the innocuous piece of plastic in our mouth and sucked; the next thing we knew, the world was spinning and it felt like tiny shards of asbestos were filling our lungs.

(By the way, the third coworker is now looking at some weird audio visualization. What are those things called? Not sound waves, but they kind of look like EKG screens? We think he might be editing a song he just made.* Now he’s reading his email again.)

“I wish I hadn’t had coffee right before taking this,” the giggling coworker gasped, before reaching for more coffee.

Five minutes later, two participants had come down from their high, one had left the building, and we were left writing this post about AeroShot Pure Energy, which we just noticed came with the most amazing cover letter ever:

“It all started with a bet. (Editor’s note: Never a good sign for your non-FDA approved drug.) The concept for this revolutionary new product was developed by David Edwards, Harvard professor and leader of ArtScience Labs, a network of culture labs. While having lunch with his friend Chief Thierry Marx at Marx’s restaurant, he began discussing ideas for a collaborative experiment for his cultural design center, Le Laboratoire. He asked Thierry if he thought it would be interesting to breathe food; Chef’s eyes lit up, but he doubted it would work. The bet was on…”

It took us two and a half minutes to transcribe that paragraph. We’re starting to crash, and feel a dull headache coming on. Incredibly, we are considering of reaching for another “shot” to boost us back up.

Conclusion: If this is this the baseline reaction to an “inhalable” drug–and how good can this stuff be for your lungs, though according to it’s press release it doesn’t go into your lungs, but your digestive tract, which is weird because we couldn’t stop coughing– without combining it with alcohol, we shudder to think of pumped-up 21 year-olds grabbing this thing after tequila shots and sucking them down like asthmatics at the end of a marathon.

For once, we agree with the government and Chuck Schumer trying to dictate our freedom of choice. This shit should not be legal.

*We were just informed that our coworker was actually recording an “audio file,” not editing a dubstep remix. Also, his mouth is numb and he seems kind of mad at us. 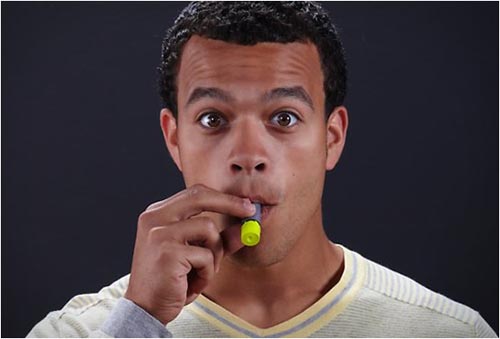