The buried 2009 Republican gubernatorial candidate from Kinnelon called county chairs today and told them he wants a piece of the LD 26 fight, scheduled for tomorrow night at the Zeris Inn.

As the establishment fave, DeCroce immediately became a target for Casha, an attorney in Montville.

A 2007 Assembly candidate casualty to Assemblyman Jay Webber (R-26), Casha’s going aggressively at DeCroce in an attempt to break up the inevitability factor. He sent a letter to GOP committee members over the weekend in which he bashed DeCroce.

“When it comes time to vote, what will you choose?” he asks in the message.

“Qualified experience: Larry has run a successful business for 32 years; Larry is a former Kinnelon Councilman and Council President where he kept the local tax rate virtually flat for five years; Larry is a former trustee at the County College of Morris; Larry served on the Board of Morris First Night and volunteers legal services to the Montville First Aid Squad and Fire Dept.; Larry currently serves as Kinnelon Republican Committee Chairman; Larry also serves as Morris County Republican State Committeeman.”

One insider regarded the communication as Casha drawing blood heading into tomorrow’s contest. 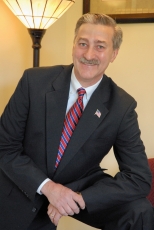