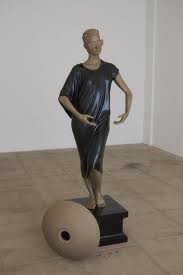 The sculptor Frank Benson is now represented by Chelsea’s Andrew Kreps Gallery, according to the gallery’s director Liz Mulholland. The artist formerly showed at Taxter & Spengemann, the Chelsea gallery that closed at the end of 2011.

Mr. Benson’s work–which is, at once, ultra-lifelike and surreal–was on display in Miami during Art Basel Miami Beach, when Adam and Lenore Sender showed a selection of work from their collection at one of their homes. By the pool, the Senders displayed an eerily realistic bronze statue of a man that looked more like an actual guy painted bronze than a statue of one.

Mr. Benson’s last show at Taxter and Spengemann featured a single life-size bronze statue of a woman. She is draped in black fabric and would look like an Ancient Greek Goddess if not for the gaudy sunglasses perched on her face.