Goldstein said Christie called him a few minutes before making the announcement to the press today: “As I told the Governor right then and there, you could have picked me up off the floor.”

Goldstein said the governor has interacted in good faith since his election, even though the two sides do not agree on one of the preeminent issues: same-sex marriage.

“When I met with Governor Christie in 2010 at his request, he told me that though we would differ on some issues like marriage equality, he viewed the LGBT community as an important part of New Jersey, and that he wanted his Administration to have a good working relationship with Garden State Equality,” Goldstein said in an email statement today. “That has been the case every step of the way. Since Governor Christie took office, his Administration has treated us with warmth and responsiveness. Yes is yes, no is no, and we’ll get back to you means they get back to you faster than you thought, usually with invaluable help.”

He credited the front office on passage of the Anti-Bullying Bill of Rights signed in January 2011, and said his praise of the governor was not solicited.

“I am simply giving credit where credit is due, too rare in political life,” Goldstein said.

“Now, as for the marriage equality bill:  The Governor and I didn’t discuss that in our phone conversation,” he said. “I recognize, and caution everyone, that it would be unwise to read any change here in the Governor’s position on marriage equality; he has said in past months and years that he would veto the bill, and we take him at his word. We will fight hard every minute of every day to win marriage equality in New Jersey.” 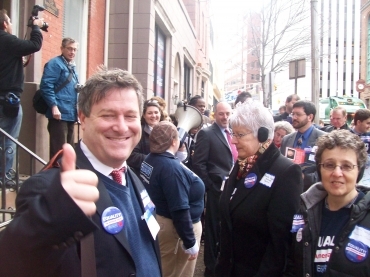