“The President is right to put private sector growth at the center of his agenda to create jobs, and his address laid out specific steps to build our country’s economy not just for today but for future generations as well,” Governor Cuomo said.

Governor Cuomo’s relationship with the Commander in Chief has had its ups and downs. Though President Obama helped paved the way to Albany for the governor by asking David Paterson not to run for re-election, Governor Cuomo reportedly has lukewarm feelings about the president. Earlier this year, some Republican insiders even went so far as to stoke wild speculation Governor Cuomo is rooting against President Obama in this year’s election due to his own presidential ambitions.

Despite the rumors of a less-than-stellar relationship, the proposals put forth in the president’s speech dovetail quite nicely with the agenda for New York Governor Cuomo laid down in his recent State of the State address. In his speech, Governor Cuomo announced plans to drive revenue to the state through a series of large-scale construction projects created through public/private partnerships including a new Tappan Zee Bridge and “the largest convention center in the nation.” In the State of the Union, the president called for lawmakers to spur growth through construction projects and infrastructure improvements. He also promised to sign an Executive Order in the “next few weeks” that will clear “the red tape that slows down too many construction projects.”
Governor Cuomo gave high marks to the president’s proposals to “work with private industries to rebuild America’s manufacturing sector.”

“Here in New York State, we have seen the effectiveness of public-private partnerships at jumpstarting economic growth,” he said.

“The development of natural gas will create jobs and power trucks and factories that are cleaner and cheaper, proving that we don’t have to choose between our environment and our economy,” President Obama said.

Governor Cuomo ended a state ban on hydrofracking last summer and, with the Department of Environmental Conservation, is conducting hearings to come up with rules to allow hydrofracking in New York.Proposed regulations would permit the procedure in the state excepting the New York City and Syracuse watersheds, which would be surrounded by a 4,000 foot hydrofracking buffer zone.

President Obama focused much of his State of the Union address on education including proposals to require “that all students stay in high school until they graduate or turn eighteen,” double the number of college work study jobs, extend the tuition tax credit and reduce federal aid to schools that hike tuition. Governor Cuomo similarly focused on education in his State of the State where he promised to be New York’s “student lobbyist.”

“As we in New York work to transform our state’s education system, I welcome President Obama’s call for a renewed focus on making sure all students receive the education and training they need to be successful in today and tomorrow’s economy,” Governor Cuomo said in his State of the Union response.

Governor Cuomo closed his statement by borrowing a bit of schtick from Herman Cain and saying the “top priority” for elected leaders “must be jobs, jobs, jobs.”

“When the national economy improves New York benefits, and I look forward to continuing to work together with the President and our federal representatives to grow our economy,” the governor said. 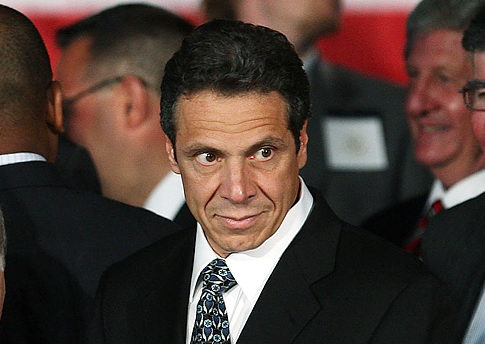