What? Are you telling us that H&M–a company that sells a line by Versace and holds itself up to the highest quality of clothing (until it falls apart in three months)–actually plagiarizes other people’s materials? It would seem that way, according to one woman’s claim that the ready-to-wear clothing line stole her design from an Atlanta billboard.
From Regretsy:

From: Tori LaConsay
Subject: Copyright infringement by H&M
To: Helen@regretsy.com

The East Atlanta Village is one of the most loving, tight-knit neighborhoods I’ve ever known. The residents are like family.

On December 14, 2008, I painted a love letter to my neighborhood. The sign was located on the main thoroughfare on Flat Shoals Avenue.

A few days ago, friends started sending me links to the H&M UK website. Apparently, H&M were so impressed by my work, that they were using it on pillowcases and doormats, with no credit or compensation.

When reached for comment, and H&M representative replied via email:

“We employ an independent team of over 100 designers. We can assure you that this design has not been influenced by your work and that no copyright has been infringed.”

Since the posting of the Regretsy article, hundreds have flocked to H&Ms Facebook wall to voice their discontent. But from a legal view, this may be beside the point. Unless Ms. LaConsay had actually copyrighted (or trademarked, depending if you think it’s her phrase or her little heart “art” that makes the billboard unique) her work, H&M would be able to use the image she painted on the billboard for as many designs as they wanted. Still, all the bad press must be getting to them, because an hour ago the store’s Facebook posted this:

We are very sorry about the answer you received from our Customer Service team. We are in contact with Tori LaConsay and will continue the dialogue with her directly.

Also worth noting that both products are currently “sold out” on the H&M site. So at the very least, no new items are being shipped. 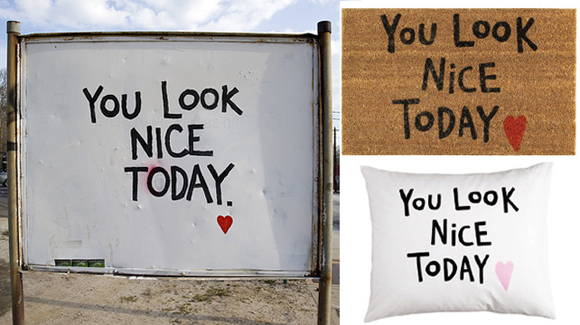