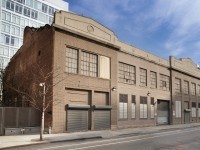 Last week, The Observer‘s Dan Duray published a comprehensive profile of the Hauser & Wirth gallery, on the occasion of its imminent expansion into a larger space in New York. The gallery has just announced the location of that new branch: it will be at 511 West 18th Street in Chelsea, and it will open this fall.

The 23,000-square-foot space—it will rival the massive Gagosian Gallery space on 24th Street and 11th Avenue—was originally constructed in the 1930s as a working stable and garage. It later became the Roxy roller skating rink and discotheque. A press release from the gallery highlights that the space is accessed by a 20-foot-wide interior ramp and will have “soaring ceilings”; clearly it will be able to accommodate very large artworks, something that was not possible at its uptown branch, in a townhouse on East 69th Street, which the gallery has operated since September, 2009. The gallery also has spaces in London and Zurich.

“New York is the world’s art capital and its cultural ecology is unlike that of any other city,” Iwan Wirth said in a statement. “It offers the world’s largest audiences, which are extraordinarily diverse and sophisticated, along with the highest concentration of great museums, galleries, alternative spaces and arts organizations. We are excited to expand our capabilities as a social and cultural shop in such a rich, dynamic, creative environment. Hauser & Wirth’s entire global team is delighted and honored to be able to increase our participation in the life of New York City, and to create another special destination where the public can engage the work and ideas of the artists we represent.”

Filed Under: Arts, Hauser and Wirth