HILLSBOROUGH – In a no-surprise move, 16th Legislative District Republicans tonight backed Readington Committeewoman Donna Simon to fill a vacant Assembly seat in what was just the first round of what Democrats hope will be a proper Republican bloodbath.

Simon drubbed Bill Spadea of Princeton, 155 to 52 votes, to become the assemblywoman-designate.

“I’m humbled and honored by so much support,” Simon said in the Hillsborough Twp. Municipal Complex. “We’re seriously going to kick some butt in November.”

In a convention fight with Spadea, Simon had the backing of the establishment coming into this contest and a promise by GOP leaders that Hunterdon would get the seat, irritating to a grumbling handful who worked the phones but finally found the odds insurmountable.

With Spadea getting mowed down tonight all but certain, the only question was whether the second-place finisher would sally out of here in support of Simon or persist in his quest for the seat in a GOP Primary.

Spadea said he wants to continue.

“You gotta love politics,” he said, sailing through the room among quickly grabbed and touched hands.

He intends to run in opposition to Simon in the 16th District, which includes portions of Mercer, Middlesex, Hunterdon and Somerset.

“Look, friends told me not to even bother but I came to pay my respets and now it’s time to reach the people,” Spadea said. “I love primaries.”

He wants the seat occupied for 16 years by the late Peter J. Biondi, and conceivably there could be a ragtag line in LD 16 consisting of anti-establishment Republicans: former Highlands Mayor Anna Little for U.S. Senate, David Larsen of Tewksbury for Congress in the 7th District, and Spadea for the Assembly.

Larsen was here tonight and affirmed the possibility of such a ticket construct. Little campaigned with Spadea in the 16th District as recently as last weekend.

The Larsen/Spadea alliance is real, but sources close to the renegade Republican Assembly candidate told PolitickerNJ.com it would be highly unlikely that Spadea would team up with Little. He likes Kyrillos and considers him a friend.

In the lead-up to voting, all four candidates, including Simon and Spadea, acknowledged a coming dogfight with the other team. Democrats did better than expected last year in a redrawn 16th District and eye a special election this year with newfound hunger.

“My idea was to run a convention race the way you’d run a primary,” Spadea said.

The word was he aggressively pursued this. Maybe too aggressively, he acknowledged cheerfully after someone in the crowd objected to his candidacy with a loud harrumph.

“We don’t want to look back ten years from now and say we really missed the boat in getting that person in there,” Spadea said. “Chris Christie’s out there fighting the good fight…”

Spadea wants to join him.

But Team Christie – with recognizable establishment faces a glimpse away in and among the crowd – apparently doesn’t want Spadea.

“I’m the only elected official in this race with a proven record of cutting taxes,” she told the crowd. “We’re about to engage in a fierce campaign. One that is going to be our toughest ever. This will be my full-time focus.”

She was soft-spoken and heavy on Biondi references on the heels of Spadea, who was dynamic and mobile with the microphone.

Two other candidates trudged to the podium.

John Saccenti of South Brunswick urged committee members, “Go with your heart in deciding who would be the best candidate.”

Saccenti later told PolitickerNJ.com he would back Simon in the primary.

“I got to know her and like her,” said the South Brunswick health commissioner, who fears the ravaging consequences of a primary.

Popular in his hometown, Saccenti said his calculation all along was to be the best-bet Republican to break up the Democrats in their Middlesex base in the redistricted 16th.

An 11th hour entrant to the contest, Barbara Sachau grabbed a microphone and told the crowd “we all need relief from high taxes.”

“I would be in favor of cutting spending,” she said.

Finally, it was Simon v. Spadea, with Spadea humbled with committee members but obviously animated to take this thing outside. 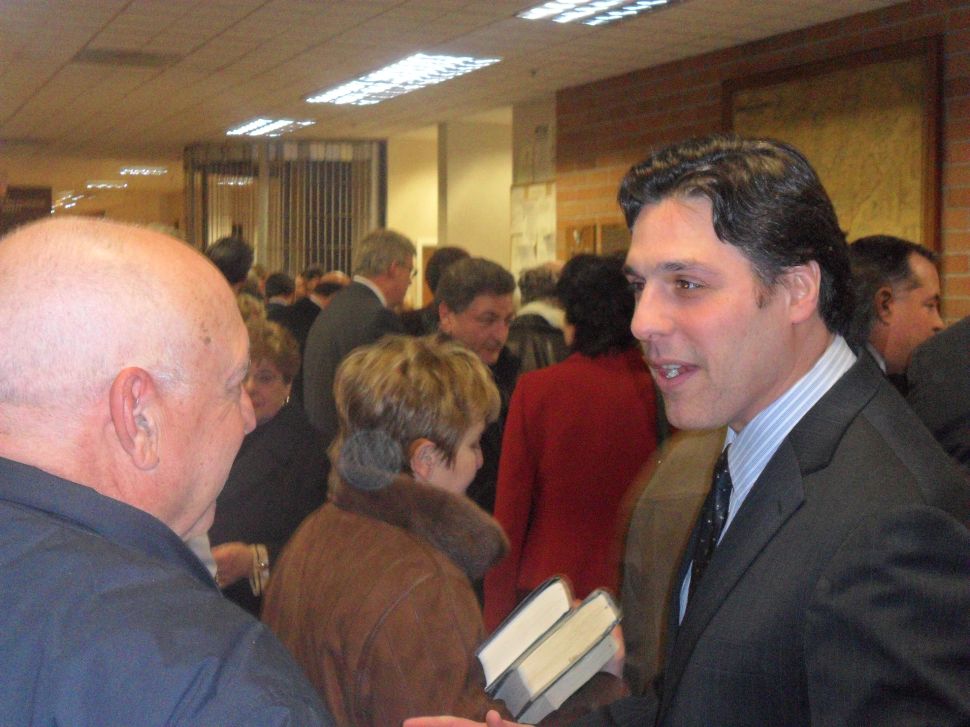