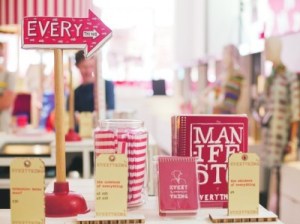 The Shop of Everything. (Sophia Schor-Kon)

James Brett is a busy, tightly wound man who can say—for anyone else it would be a gross exaggeration—that he is occupied with Everything.

The Observer met Mr. Brett, founder of London’s The Museum of Everything, in the lobby lounge of the Bowery Hotel two Sundays ago. He’d just flown in that afternoon, but by the time we arrived, at 6, he’d already installed himself on one of the lounge’s couches, where he was perched before a nearly empty cup of coffee and a mostly untouched bowl of mixed nuts. Beside him on the sofa were his weapons of choice: notebooks, papers, a BlackBerry, a white iPhone. A thickly bearded man, he wore a pin on the lapel of his jacket that said, in a loping blue and red script forming a circle, “Everything.”

The museum is dedicated to what most of us call outsider art. Mr. Brett, whose speech comes rapid-fire, has long been vocal in his disdain for that term, a catchall for a hodgepodge of self-taught, folk and vernacular creations, as well as art by the mentally ill and handicapped. Nevertheless, this week he is launching his first foray into New York at the Outsider Art Fair (which runs through January 29 at 7 West 34th Street) with an installation of his Shop of Everything, the store that accompanied his museum’s latest iteration in a gallery inside London’s Selfridges department store this past fall, an exhibition of work by 200 people with disabilities (ceramic cameras by Alan Constable, is deaf and blind; fantastical scenes painted by Marianne Schipaanboord, who is deaf and has cerebral palsy). Mr. Brett was in New York last week showing some of Everything’s catalogues at the Metro Art Show, but his Outsider Art Fair outing is more ambitious, with lithographs, travel bags, stationary, home ware and clothing.

We were surprised he was showing at the Outsider Art Fair.

“Me too,” he replied, and launched into the “long philosophical rant” that is his objection to the term. The gist is that, far from being “outside” the tradition of art-making, so-called outsider art is actually central to it, in the sense that it represents a pure form of creativity that harks back to original forms of human expression, such as cave painting. He thinks the term carries shades of a kind of cultural segregationism, and bigotry. Creativity, he maintains, comes before language. He zipped through the history of the material. The artist Dubuffet’s becoming interested in Art Brut. Collectors acquiring work by mental-hospital patients. MoMA founder Alfred Barr’s taking an interest in vernacular art. Then he stopped. “People liked the coolness of the name ‘outsider.’ The more it infiltrated, the more everybody was an outsider artist. When I made the museum, I would get no end of people coming up to me and going, ‘Hi, I’m an outsider artist.’ Every good artist thinks they’re a bit of an outsider. Let’s be honest: every good artist is probably a bit of an outsider. So what the hell does it even mean?”

During his Selfridges show, he put together a panel discussion that included artist Antony Gormley and Hayward Gallery curator Ralph Rugoff, among others. He plans to screen it at the Outsider Art Fair this Friday. The title and subject—Mr. Brett’s idea—was “Is It Art?” “A really fatuous title,” he said. “Because I wanted them to discuss, Can somebody who cannot conceive of what they do as art be an artist?”

The timing and location of the first Everything was significant: Mr. Brett launched it in October 2009, during London’s Frieze Art Fair, the city’s most important commercial contemporary art event, in a building directly across Regent’s Park from Frieze’s massive tent. (Two subsequent Everythings have also coincided with Frieze.) He counts the contemporary art world’s denizens among his friends and colleagues, and made daily forays into Frieze, to promote Everything, which was doing a show in which contemporary artists like Ed Ruscha and Annette Messager were asked to pick out work by, well, outsider artists; he was rewarded with attendance of 35,000 for a four-month run. In its two-month run, the Selfridges show attracted some 100,000 souls.

The closest thing New York currently has to The Museum  of Everything is the American Folk Art Museum, these days arguably better known for its financial troubles than for its exhibitions. Recently, the museum had to abandon its gleaming, 10-year-old building on West 53rd Street for smaller quarters across from Lincoln Center. Is it possible that Mr. Brett’s model of aggressively reaching out to the contemporary art community might be instructive for the Folk?

“I usually start thinking about doing something about 10 minutes before I do it,” Mr. Brett said. “Well, it’s not quite true. We were going to do a very big show this year in New York.” Before the Folk Art Museum’s troubles, he said, he’d been in discussions with it about planning something there, which potentially would have involved The Museum of Everything’s occupying the museum. He’s already presented Everything in two museums, Tate Modern and the Pinacoteca Giovanni e Marella Agnelli in Turin, Italy. He has long wanted to expand into the U.S. and said he’s had “invitations from Los Angeles, Philadelphia,” but wants to start in New York, where he attended film school.

Mr. Brett keeps Everything afloat through indefatigable self-promotion. At the Bowery, he was approached by a waitress, who mistook his pin for the work of a contemporary artist. “Is that David Shrigley?” she asked. “No, it’s me,” he replied, and launched into a pitch for Everything. He apologized to The Observer by muttering, “Endless promoting activity.” His museum has even been the beneficiary of attention from the fashion world: when he mounted an exhibition of the collection of Peter Blake, the artist best known for the cover of the Beatles’ Sgt. Pepper’s album, in London early last year, a member of the Missoni family took notice, brought in photographer Juergen Teller, and staged that company’s fashion campaign there.

Filed Under: Arts, James Brett, the museum of everything