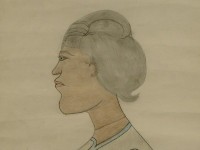 At his booth at The Metro Show, a new arts and design fair focused mainly on American folk art, James Brett, who runs the London-based Museum of Everything, looked around cautiously before removing his shirt.  Across the aisle a dealer looked at him with a judgmental gaze before Mr. Brett told her, “You’re funny.” He was fully clothed by the time a female visitor arrived at his booth.

“Hello, do you know who we are?” he said. “I’m the Museum of Everything. How are you doing?”

“What is what?” He flashed a look around the booth. “Oh. We’re the world’s most successful museum—according to me—for showing work by non-traditional artists, which encompasses a whole number of things from self-taught to vernacular to your mother’s stuff that she kept in the attic to something you’d find in a junk shop to the guy on the street to the guy on the moon. Our first show we had 60,000 people come. Our second show was at Tate Modern.”

“And what are you selling?”

“We’re selling our books,” he said motioning to a number of catalogues of the shows Museum of Everything has done since starting in 2009. “There are only a thousand of each one and they’re not available anywhere else in the world because I don’t trust anybody. And they’re the most beautiful thing you’ll see, printed in Italy, hand bound by virgins. If you talk to the guys who run the Whitney, they present to you the history of American art, but if you ask them if they’ve got Bill Traylor, they won’t. Because they’re not presenting that history of American art. We’re sort of an activist operation.”

The woman smiled, backed away and whispered to herself in frustration, “I still don’t get it.”

Mr. Brett raced to the front of the Metropolitan Pavilion, where the fair will be running until Jan. 22, and arranged a stack of books. “This is called stealth marketing,” he said. He paused to examine the display. With a sigh he said, “I fear it’s not fluffy enough.”

But he had to move on. There was a group of works by Henry Darger over at the dealer Carl Hammer’s booth that he wanted to see.

“I realize all his work is intended as a single entity,” he said, then, in nearly the same breath, motioned to a different booth and added, “That’s the best tramp art frame you’ll ever see. This is Cliff. Compulsive, obsessive, in love with tramp art.”

“Cliff” was Clifford Wallach, who hastened to agree with Mr Brecht. “Absolutely,” he said. “It’s my whole life. All these pieces are made from cigar boxes with simple tools like a pocket knife.” He stood in front of a large wooden mirror, with a scratchy texture from small carvings etched into the wood. “Most of the pieces here are from the 1870s all go hand and hand with the revenue laws in this country which mandated cigars must be sold in wooden boxes, you can’t use the packaging for resale. It just arose all around the world at the same time. We don’t know how it started, where it started. There’s no patterns.” He removed a small frame from the wall and inspected the back, looking intently at the cigar brand names still visible in the wood. As for the label “tramp art,” he finds it “catchy, but inappropriate.”

The fair was a grab bag of Americana, outsider art and bizarre cultural artifacts. The six Joseph Yoakum landscape paintings on display at Carl Hammer were eclipsed by an understated profile portrait by the artist with the title “Kathy Poillian, 1st Strip Dancer in 1893.” A Millerite teaching banner from 1854 stood out at Michigan’s Hill Gallery. It depicted the second coming according to William Miller and his followers (he thought it was going to happen in 1840. Whoops.) and featured all kinds of unpleasantness: a seven-headed beast with horns emerging from the ocean, the four horseman of the Apocalypse (looking surprisingly conservative in contrast to a lot else going on) racing long, snakes with crowns whose heads were jutting out of a larger snake with a crown. That kind of thing. In a tight corner sandwiched between the American Folk Art Museum’s booth and conspicuously close the press room, a bearded man was serving 10-year rye whiskey out of a small wooden still. The walls around him were covered with American flags from throughout the country’s history.

Barry Friedman Gallery was a pleasant anomaly; they were displaying the photographs of interiors in Havana by Michael Eastman.

“I think we stick out a lot,” said Carole Hochman, the gallery’s director. “It’s…interesting being across from South American textiles from 2,000 years ago.”

At the booth of Allan Katz was a wood-carved sculpture of Thomas Dartmouth Rice’s Jim Crow character, the face all done up in exaggerated black face, the body carved into an eerily whimsical and joyous pose. Mr. Katz was talking with great pride about his Jim Crow statue, calling it “a true New York piece.”