Are you coming up on this election year feeling a little limp? Don’t have the stamina to plow through another round of “Yes we can?” (Especially since you’re not even in the mood anymore?) Do you live on 123rd street and Riverside Drive?

Well, then you’re in for a big treat this morning. Designer Kenneth Cole is premiering the first politically-aimed billboard in his “Where Do You Stand?” campaign.

Mr. Cole, known as much for his aggressive activism as he is for his modern take on the Oxford, has been stirring the pot with his controversial WDYS billboards since they lauched in September, but so far the campaign has focused mainly on hot-button issues rather than attacking politics straight on. (For example: his Right to Choose poster, which isn’t asking you the question of “Where Do You Stand?” so much as telling you that there is one correct way to answer this question.)

“We’ve often said what you stand for is more important than what you stand in but this primary process is leading us to believe otherwise. Reality TV has never been this good. As we ask ourselves on wheredoyoustand.com, ‘With the whole world watching, are we really proud of our electoral process?'”

Again…not so much asking as presuming, but at least Mr. Cole has his heart in the right place.

And hey, if you don’t like his billboards, you can always make your own! Seriously: Mr. Cole is currently holding a contest on his Facebook page, asking people to come up with the next caption for his rage against the machine-style smackdown. Winner gets their slogan on a billboard! We’d love to see something that’s a little more inspirational than “Electile Dysfunction”, which is sort of defeatist in nature and doesn’t rally our spirits so much as make us want to call out sick from work so we can stand naked in front of a mirror and cry. 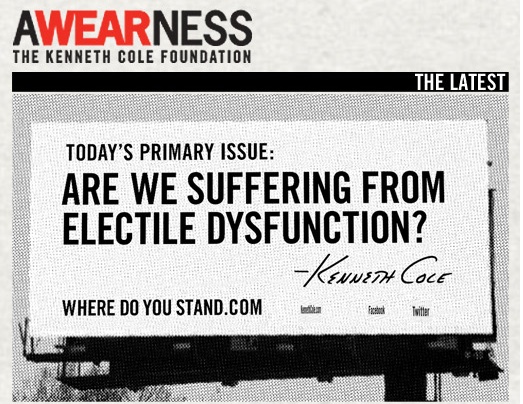