Good news for all those scrappy independent writers and publishers out there: despite what you may have heard in the press about how difficult it is to crack into the literary world, it is still possible to turn your World War II zombie comic book into a New York Times best seller on the basis of Internet buzz alone.

Yesterday on Reddit, a commenter under the name humansmartbomb introduced himself in the AMA (Ask Me Anything) subforum with the post: “My Kickstarter funded Indie Graphic Novel just made it on the New York Times best selling Graphic novel list.” Here’s the opening shot:

Fubar Empire of the Rising Dead! It’s got 40 contributors and is 272 pages. 27 short stories centered around a zombie outbreak in World War 2 in the pacific theater. Volume one covered the European theater. I wrote and drew a few of the shorts but primarily I edited the collection. So fucking proud of my guys and girls! We’re number 6 on the list.

The author of this post would be Jeff McComsey, who has penned two volumes on undead outbreaks in the Pacific Theater and the European/Western Front for Alterna Comics.

In August, Mr. McComsey started a Kickstarter page for FUBAR 2: Empire of the Rising Dead. He was asking $3k for the anthology, which he raised in a week. By September 9th, the book had received $6k in donations.* The author/editor gave the history of FUBAR on his Kickstarter site:

The 20 stories that comprise FUBAR volume 2: Empire of the Rising Dead all take place exclusively in the Pacific theater of World War II. Replace zombie Nazis with Zombie Kamikazes and add in a helping of crazy zombie Jarheads and you get the idea.

Currently, FUBAR: Vol 2 is selling ahead of the first issue of The Walking Dead, Alan Moore‘s Watchmen, and V for Vendetta on the New York Times’ Best Seller list of paperback graphic books.

*It should be noted that Alterna Comics (which produces mainly zombie-related stories) tried Mr. McComsey’s tactic; raising $1,000 on IndieGoGo last September to “avoid bankruptcy.” They overshot their $1,000 goal by $300. 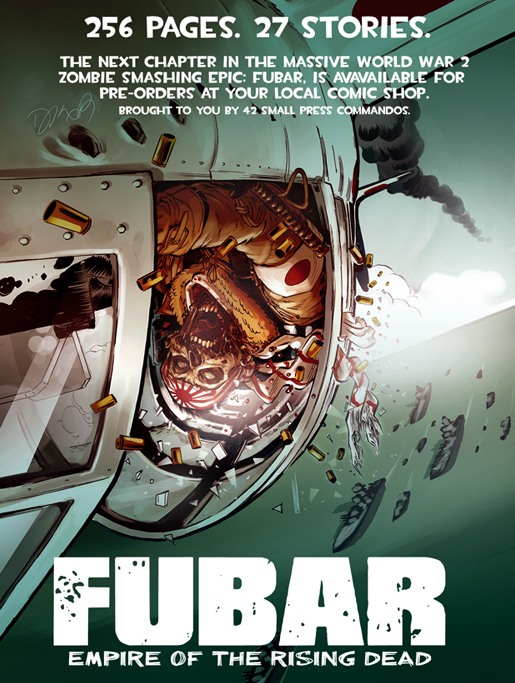