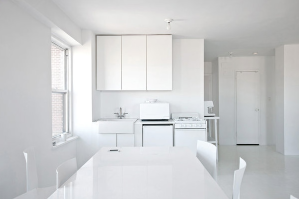 An article in The New York Times about “design perfectionists at home,” unsurprisingly includes MoMA PS1 director Klaus Biesenbach. You might remember Mr. Biesenbach from such editorial house tours as W magazine’s “Klaus Haus,” an article that revealed the museum honcho’s apartment was virtually empty,  save a mattress and a toilet. (The article even inspired a short play that was, tragically, never produced.) “I hate design,” he told The Times in the more recent piece.
Well, as it turns out Mr. Biesenbach’s apartment got a bit of a makeover recently. According to The Times:

“[L]ast summer, Mr. Biesenbach, who was traveling a lot for work, lent his apartment to an artist friend whose studio roof had collapsed during July’s heavy rains. When Mr. Biesenbach returned, his home had been altered. The artist had brought in his own sofa, dining table and chairs, and painted the entire apartment — the walls, that sofa, even the DVD player and the cable box — in white house paint.”

Allow us to state the obvious here and say that “an artist friend whose studio roof had collapsed during July’s heavy rains” basically hast to be Terence Koh, the ultimate champion of the white hue, whose Asia Song Society gallery closed last summer after severe structural damage.

Naturally, Mr. Biesenbach, formerly the chief curator of media and performance art at MoMA, said his new sofa was “more performance than object.” Kind of makes us feel better about spending all those lazy afternoons lying on the couch.