Lana Del Rey is probably a name you are no doubt sick of hearing regardless of whether you understand who or what a Lana Del Rey is. Rest assured, that will soon be over. The singer formerly known at least one lip-injection ago as Lizzy Grant received her proper, full-length Pitchfork Media review today.

Can you guess how she scored?

If you guessed “not well,” then you’re quite adept at guessing the answers to easy questions. Yes, in Lindsay Zoladz’s review for quintessentially hip music site Pitchfork of Lana Del Ray’s full-length album Born to Die, Lana scores a mere 5.5. Not worthy of brickbat-style derision, nor serious praise.

Mind you, it hasn’t been but four months since Pitchfork’s Ian Cohen scored Ms. Del Rey’s track “Video Games” with the coveted “Best New Track” designation that set off an indomitable firestorm of hype.

In the time between the two reviews, public sentiment for Ms. Del Rey has, well, dwindled.

Ms. Del Rey’s career was found to be one of corporate construct and deliberate artifice, flying in the face of the “indie” image of her that was carefully cultivated (the starter pistol if which, for all intents and purposes, was started by Pitchfork).

Whether consciously or not, Pitchfork’s reputation for building an emerging act’s hype in one hand only to swat it down in the other continues to be cemented herein.

Another recent example: Mr. Cohen reviewed Queens rap act Das Racist‘s mixtape with an 8.7, one of the highest scores a mixtape has ever received on Pitchfork. Mr. Cohen was subject to a second-hand derision by the group after a blogger noted that he had mis-identified some of the rappers in his review and highlighted the jokes, thereby missing the ideas core to the album concerning race and identity. When Das Racist’s full-length album came out, like Ms. Del Rey, their single was given a “Best New Track,” though not by Mr. Cohen, who gave the album a 6.3/10.0.

Furthermore, while Ms. Zoladz acknowledges the early critical success of “Video Games” (as it, to her, “felt frank, pointed, and true, and it had a chord progression and melody to match”) it would appear a final paragraph vaguely acknowledging some of Pitchfork’s responsibility in Ms. Del Rey’s hyperinflated rise in popularity (one that could be on the precipice of crashing down to earth) was scrubbed from the review shortly after it was posted last night.

Music writer and journalist David Greenwald caught the scrub, and posted it on his blog. The paragraph read:

Given the lengthy build-up and all the YouTube leaks, think-pieces, and controversy that followed, you can only spend so much time in Born To Die’s nihilistic Never Land before Peggy Lee’s famous question starts to nag: Is that all there is?

Ms. Zoladz has not returned The Observer‘s immediate request for comment, though to be fair, last-minute edits happen all the time. Sometimes, something goes up on a website and just doesn’t read well. It happens. Yet, it’s been noted: “That seems like a pretty hefty edit to make after pushing the post live.”

One wonders if Pitchfork couldn’t rescind their entire history with Ms. Del Rey’s rise, or if they will. One musn’t forget the classic Best New Music review Pitchfork bestowed upon 90s ska-act Save Ferris in the site’s salad days. For the record, you won’t find it on Pitchfork, because they scrubbed it out of existence.

Either way, you can expect Pitchfork to say very little on the matter. Why would they? The conclusion to this saga demonstrates— inadvertently or not—Pitchfork in the role of tastemaker. Just like Google with their top secret algorithms, whether the site has an awareness of this role while writing reviews or not, they stand to gain nothing by giving up their secrets.

One of the great secrets of rock and roll, after all, involves the preservation of mystique, even if you’re playing nothing but up-and-coming music acts and the people who buy into them. 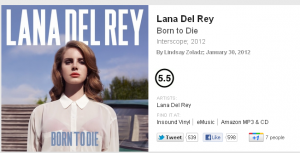