The report, which covers the fourth quarter of 2011, details some $2,275 in purchases made to a credit card in DiVincenzo’s name and another $6,000 listed on the report as “debit card.”

This round of disclosures is missing the nearly two dozen rounds of golf that marked the previous report, but the filing shows the Essex Executive spent thousands on lunches and dinners including nearly $1,200 on a November meal at Fornelletto in West Orange and another $1,366 on Dec. 22 at McLoone’s Boat House, also in West Orange.  That charge was in addition to a $10,000 check to McLoone’s written directly from the campaign labeled “holiday party.”  The two restaurant bills were listed as charged to the “debit card.”

The report does show one golf outing, one a Saturday in October, and lists the reason for the $158 charge as Golf foursome for DiVincenzo’s 9th annual tournament.

As PolitickerNJ first reported Sunday, DiVincenzo’s campaign filings for the past several years detail more than $175,000 in reimbursements for charges to his personal credit card, without the itemization of the charges that is required by law.

An attorney for DiVincenzo maintains that the previous filings were done correctly but said DiVincenzo would re-file past reports to show the itemizations.

In October, DiVincenzo included his first itemized list, which included 26 rounds of golf charged to the campaign account between late-May and mid-September.  Of those, 17 were charged on non-holiday weekdays.

The October report also lists an Aug. 8 charge of $57 at Goldsmith Golf Center in Livingston, a discount golf equipment store.  That same day, the report lists a $50.01 charge to Hendricks Golf Course in Bloomfield.

In July, DiVincenzo was reimbursed for $90 for “bike repairs.”  On Monday July 18, the executive lists two rounds of golf, one at Weequahic Park in Newark and the other at Hendricks in Bloomfield.

Asked to comment on the charges, counsel Angelo Genova instead said the charges would be addressed by the Election Law Enforcement Commission.

“These matters are being addressed in the context of the government agency responsible for overseeing campaign finance expenditures, the New Jersey Election Law Enforcement Commission. We welcome the opportunity to address them in that appropriate forum,” Genova said.

Last spring, former county executive candidate Marilyn English filed a request for an investigation with ELEC over what she termed “excessive expenditures” on DiVincenzo’s credit card.

ELEC would not confirm or deny receipt of the complaint, but English produced a letter she received from ELEC saying the agency was looking into it. 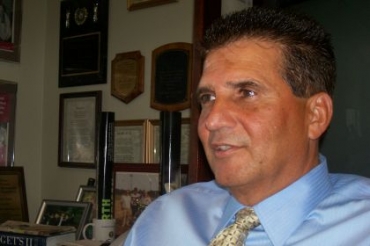