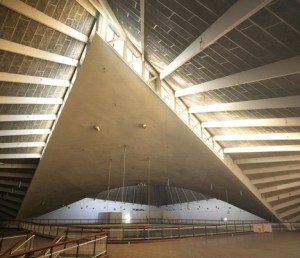 London’s Design Museum plans to restore the Commonwealth Institute building in Kensington for its new home there. The building, a paragon of 1960s architecture, has been closed since 2002 and the renovation is expected to cost $125 million.

From the Evening Standard:

“Sir Terence Conran, the museum’s founder, said: ‘It was the first architecturally exciting building constructed in Britain since the war. It’s the dream site and will be the best design museum in the world.’

“Architect John Pawson, heading the transformation, said: ‘In making this legacy for future generations, we are saving a work of iconic architecture. I hope the result will demonstrate that you don’t need to demolish old buildings to make wonderful new public space.’

“The new scheme sees the dramatic, swooping copper roof of the former Commonwealth Institute – originally designed to create the sense of “a tent in the park” – become the focal point of the giant interior.”