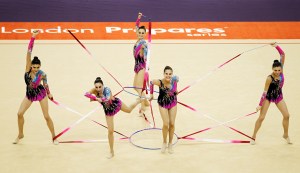 The 2012 Israeli Rhythmic Gymnastics team, one of the many things distracting people from art.

The influx of visitors to London for the 2012 Olympics is not expected to be a benefit for London’s storied cultural institutions.

The Art Newspaper reports that Victoria and Albert Museum trustees were warned by consultants last year that “benefits for cultural organisations may be before and after the Olympic year, rather than during it.”

Apparently non-Olympic tourism actually tends to drop off when a city hosts the Olympics. Most museums are projecting average-to-sub-average attendance this year.