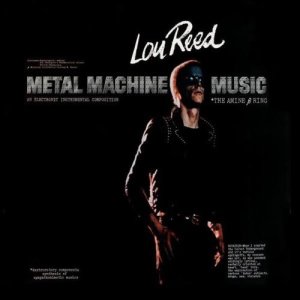 Beginning today, the University Museum at Cal State Long Beach will house a sound installation based on Lou Reed’s 1975 album Metal Machine Music. The double album was largely a critical and commercial failure upon its release, but it went on to appeal to a generation of audiophiles and feedback hounds for its intricate recording and, well, sheer strangeness.

For those of you unfamiliar with the album, it’s basically an hour of distortion, feedback and guitar fills that are manipulated to the point of nonrecognition. A casual listen is something like this: SQUEEAAAARRRRRKKKKKKKK. For 64 minutes.

The Los Angeles Times has a nice in-depth article about the installation, calling it an introduction “to a new method of recording sound and hearing it played back as a three-dimensional, ‘ambisonic’ spatial experience.” The museum’s 500-square-foot Project Room will have 14 speakers playing back a 2009 improvisational piece by the Metal Machine Trio, a group founded by Mr. Reed in 2008 with Ulrich Krieger and Sarth Calhoun as an attempt to replicate the album in a live setting. The piece in question was performed at New York’s Blender Theater. We don’t mean to brag, but we were there, and it was brilliant. For one thing, it was noise distilled to its most abrasive components. The room sometimes shook and Mr. Reed sat at a giant table of effects pedals and microphones in a swivel chair, rolling around back and forth between gadgets and looking more like a mad scientist than a musician.

The L.A. Times piece is prefaced with the comment that Metal Machine Music “is infamous as one of the worst career moves in the history of rock stardom.” It is decidedly alienating music, but in 1975, Mr. Reed wasn’t exactly playing stadiums. He had his first and only U.S. radio hit with “Walk on the Wild Side” off of 1972’s Transformer. His next album, (the very brilliant) Berlin, was an enormous flop and the album after that was a live record of a tour where Mr. Reed wore S&M leather and panda make-up (let’s not even talk about 1974’s Sally Can’t Dance).

So: we’re not sure Metal Machine Music ruined any kind of “stardom,” other than retroactively, nor was it necessarily the worst career move (Mr. Reed’s recent collaboration with Metallica? That might take the cake.) But it’s worth noting that the album did have supporters, including legendary rock critic Lester Bangs, who had a lot of positive things to say.

“If you ever thought feedback was the best thing that ever happened to the guitar,” he wrote, “well, Lou just got rid of the guitars.”