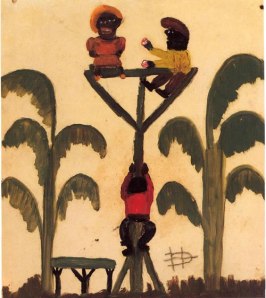 Robert E. Lucky Jr. of New Orleans was sentenced to two years in prison for selling forged paintings that he claimed were the work of Louisiana folk artist Clementine Hunter, according to the Associated Press. It goes without saying (but it’s Friday and we feel like making a stupid and obvious joke), Mr. Lucky is not, in fact, so lucky.

Mr. Lucky conspired with William and Beryl Ann Toye (totally great and ironically symbolic names in this story, huh?), who were sentenced to two years of probation back in October. Mr. Toye painted the forgeries and his wife, along with Mr. Lucky, sold them. Mr. Lucky was employed for a time by a New Orleans antiques and art dealer and was apparently well known in the New Orleans art community. He used the letterhead of his former employer in the sale of the paintings.