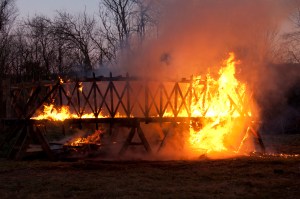 A few weeks ago, the artist Marianne Vitale was standing in the woods in upstate New York, firing a shotgun at a large wooden outhouse she had built in her studio in Queens. After she had finished building the sculpture, she felt that it was missing something. One night over a few glasses of whiskey with her two studio assistants, it became clear what the sculpture needed: bullet holes. They hauled the outhouse to a friend’s farm in Pawling, N.Y., propped it up in the middle of the woods and, in Ms. Vitale’s words, “just started shooting the fuck out of it.”

“It’s littered with bullet holes,” she said, inspecting the aftermath in her studio. “You can still see some bullets.” She indicated a wad of silver metal, misshapen and lopsided, sticking out of the wood.

It wasn’t her first trip to the woods of Pawling to partially destroy some of her artwork. For some time now, Ms. Vitale has been building bridges based on actual covered bridges scattered across the country, then setting them on fire. It started when one of her studio assistants, who works full-time as a woodworker, brought her some discarded wood from a torn-down farm upstate. She used it to make skeletal, barnlike structures, like her reproduction of a cantilever barn in the Smoky Mountains, an elevated wooden structure resting atop two chicken coops so that it looks like a big awkward “T.” She was collecting books about ghost towns of the West and the American Vernacular. She started reconstructing images from these books and became a frequent visitor to lumber yards. About a year and a half ago, she snatched up a pile of charred wood and thought of the idea of burning bridges.

“What a metaphor,” she said.

Ms. Vitale, 38, ranks among the most chameleonic of young artists, changing her method, style, material and genre so frequently that no two of her shows have looked alike. In preparation for her first solo show at Zach Feuer Gallery, which opens this week, her Long Island City studio looks something like a lumber graveyard. A 24-foot-long bridge, black and charred, the remnants jagged and frail-looking, took up a bulk of the back room. Piles of wood were stacked atop one another. There were torpedoes made of wood scattered on the floor, pieces of old caution barriers with cracked orange and red paint covering them and wooden canvases made from pieces of old factories hung on the walls. She has been a sculptor, filmmaker, performance artist and animator with a lot of variations in between. Her new exhibition, indebted to the architecture of the old West and frontier history, is yet another departure.

Ms. Vitale was born in East Rockaway, N.Y., and attended the School of Visual Arts for filmmaking, where she made stop-motion animation shorts. She chose that because she wanted to work alone. She worked odd jobs waiting tables and, for a brief period, at a zoo in Hoosick Falls. (“I shoveled shit,” Ms. Vitale said in an email. “Best job I ever had.”) In 1994, she met two collaborators that have continued to work with her to this day, Todd Colby—he was told there was a female version of him walking around the city and he had to meet her—and Michael Portnoy, who was in the middle of Ludlow Street with a loose vacuum hose trying to suck in strangers from the sidewalk; Ms. Vitale obliged. They proceeded to the rooftop of the Unification Church headquarters and smoked coffee grains from a long Chinese pipe. The three started performing under the name the Yogurt Boys. Mr. Colby still can’t say the name without laughing.

“We’d videotape made-up dramas between the three of us,” he said. “My girlfriend from that period was really freaked out by them. We were trying to figure out who we were as artists. Michael and Marianne would be in this pseudo romantic thing and I would be this outside person manipulating the bond. It was just the odd psycho sexual dynamics between three people.” He added coyly: “I was reading a lot of Lacan at that point.”

They began performing around, occasionally at the Bowery Poetry Club. Mr. Colby would sometimes wear a giant wizard hat that Ms. Vitale made for him, painted his lips blue and put on a hazmat suit stuffed with paper so that he looked like a giant Michelin Man. Mr. Portnoy was shirtless—as was Ms. Vitale—while Mr. Colby narrated in a creepy Igor voice, “The Boy and The Girl loved each other very much.”

Ask any number of people in the art world about Ms. Vitale and they will tell you stories from one of her dinner parties at her place on Delancey. Ms. Vitale insists that these were “just an excuse to throw parties.” She doesn’t consider them art, but they sound a little like one of her particularly abrasive performances.

“There was one,” Mr. Portnoy said, “where Anthony Haden-Guest was reading some limericks in front of everyone. Our friend [the comedian and artist] Dina Seiden, she was kind of erotically engaging his …” A pause. “… Face. With a bunch of Christmas lights. That was pretty good.”

As Ms. Vitale found her way, her performances became more ambitious. In 2006, she traveled to Reykjavik with David Adamo, Agathe Snow, Rita Ackerman, Mr. Portnoy and other like-minded artists for a piece called Invasionistas. Each of them “invaded” different parts of the city—the supply, the main roads. Ms. Ackerman made her own money. Ms. Vitale was in charge of propaganda. Reykjavik, during World War II, had an evacuation plan in place if the Nazis invaded. Mr. Portnoy and Ms. Vitale found the script that was to be read on air for that occasion. Following the orders, they took a group of kindergarten students, holding their favorite possessions, and marched them out of the city.

For another piece, The Clipper, she built a large hull of a ship that acted as a stage. It was for a show organized by the curatorial group Kunstverein at the Lower East Side art world hub (and sadly departed neighborhood bar) White Slab Palace. The performers sang about various maritime pleasures and discontents to a live score that sounded like something between avant-garde jazz and punk. Mr. Colby was the captain. Mr. Portnoy, who compared the piece to Love Boat crossed with Greek tragedy, was a sailor obsessed with sponges. Ms. Vitale hung dead fish and seaweed all over the space, an olfactory assault that performers and audience alike were not prepared for.

Many people first became aware of Ms. Vitale with Patron, a short video work she had initially made to show at White Slab but that wound up being one of the standout pieces in the 2010 Whitney Biennial.

Formally, Patron is fairly straightforward—just a close-up of Ms. Vitale’s face, her brow deeply furrowed and her hair tossed and sticking out in every direction, while she addresses the viewers, shouting “Patrons!” to get their attention. She takes on the guise of a drill instructor (there is even mock military music playing in the background), but her commands are largely associative and impromptu. There’s something about soaking one’s feet in gopher urine as well as the observation that good patrons don’t refuse to take their medicine.

“I’m not a rigid believer in causes!” Ms. Vitale says in the video. “I’m known for my flexibility!”

She filmed Patron in a matter of hours. There is something both casual and dire about it: The video is strung together through a series of lightning-fast edits that turn Ms. Vitale’s face into a kind of living sculpture. The cuts are the moments when she’d break into laughter or devolve into simple swearing—like “Bloody fucking Christ,” Ms. Vitale offered as an example. At one point, her cat scratched her leg and she had to take a second to yell at it. Her delivery on film, however, has so much intent behind it that the piece becomes a manifesto, albeit one with tenuous meaning. At the Whitney, Ms. Vitale’s voice could be heard throughout the museum; her impromptu rant becoming the biennial’s soundtrack.

As she becomes better acquainted with the mainstream art world, her sense of humor is all the more jarring. At last year’s Frieze art fair, Ms. Vitale quite literally reconstructed Ibid, her London gallery, inside of the booth.

“I walked past and did a double take,” said the art dealer Kenny Schachter, who leases the space to the Ibid owners. “She cut the perimeter walls of the space—of my building—and installed them in Frieze. It was the lining of the walls of the gallery! She did it without telling me. I said you must be joking that you’re gonna rip out the walls of my building and not even tell me.”

Above her computer in the makeshift office at the front of Ms. Vitale’s studio is a handwritten note: “Build a bridge … then get over it.”  Speaking with The Observer there, she wondered aloud whether her 24-foot bridge, the centerpiece of her show at Zach Feuer, was saleable, then dismissed the thought, saying it wasn’t her problem. It is worth mentioning here that the show’s title comes from a line in a poem by Mr. Colby: “What I Need to Do Is Lighten the Fuck Up About a Lot of Shit.”

Unprompted, she asked herself: “What’s next? I don’t know. I’ve been printing out pictures of ship explosions.” She motioned to the wall by her computer, which was covered nearly floor-to-ceiling with, well, pictures of ship explosions. She said she could keep building bridges and setting them on fire for the rest of her life, but it was hard to tell if she was being literal or symbolic. It was probably the latter.