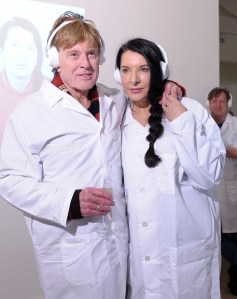 Ms. Abramovic and Mr. Redford, at the party. (Photo courtesy of Getty Images)

Performance artist grand dame Marina Abramovic got it into her head to throw a “silent” party in Sundance and wouldn’t you know it but the thing turned out to be quite the shindig. New York‘s Jada Yuan reports!

Everyone wore white lab coats and noise-canceling headphones. After an hour, the headphones came off.

Lab coats, Abramovic says, “are interesting to me because they create the situation of equality. Everyone is democratic and the same, then also become experimenters — this kind of mischieving [sic] element, which is beautiful. And I really like to change the kind of chemistry of the parties. It’s always the same.” The silent element was important because, she said, the MoMA exhibit [“The Artist is Present”] “was all about gaze. And I wanted to transport this kind of experience to the party situation. People have to look at each other in the eyes. They have to communicate in different ways.”

Robert Redford was there! Go read it!