Sen. Loretta Weinberg said, “This is one of those moments when we can all listen to our hearts,’’ and the bill will extend to people in same-sex relationships the ability to make, for example, the same kind of decisions any spouse often has to make.

New Jersey would be the seventh state to enact such a law if it passes the Senate and survives a possible gubernatorial veto.

“Nothing would interfere” with a person’s right to practice their own religion, Weinberg told opponents.

“How can we deny … full rights and equal justice,’’ Weinberg said.

Sen. Ray Lesniak talked of coming to an understanding of the shortcomings of a same-sex civil union law, and asked Weinberg to join in sponsorship of S1.

The sponsors of the Assembly companion bill also addressed the panel.

“I hope no one here wants to turn back the clock in our rich history of safeguarding popular will over the rights of minorities, which has been a bedrock principle of this country since Madison’s federalist paper 10,”  said Assemblyman Reed Gusciora, an openly gay state legislator.

He said a state law would not create a special right, but enact the safeguards of the Supreme Court’s Virginia vs. Loving decision that said the freedom to marry belongs to all Americans.

The state bills would not require a religion to solemnize any such marriage, but would rectify the injustice of discrimination that a civil union system can’t fix, he said.

“As you know from our history classes, ‘separate but equal’ is unconstitutional, as it is inherently unequal,’’ he said.

And freshman Assemblyman Timothy Eustace said that he and his partner have been raising a family and he said there is a crucial difference in having only civil unions, something he is aware of from having performed marriages as a mayor and from having been in a civil union himself.

“Over 31 years, we get up and go to work, we put on our pants one leg at a time, we go to church on Sundays,’’ Eustace said, and their church performed a holy union for them but it still is not called a marriage.  “How do you explain what a civil union is” to an insurance salesman or to an emergency room physician, he asked. 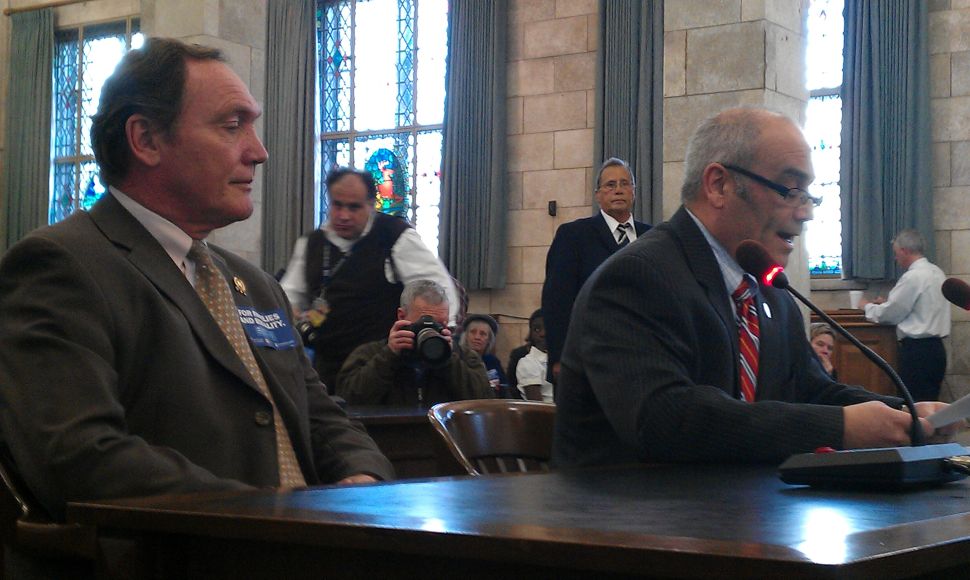