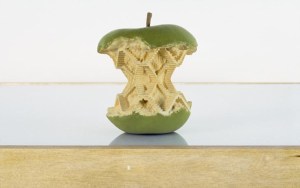 Matt Johnson, who formerly showed at Taxter & Spengemann, which closed at the end of last year, is now represented by Chelsea’s 303 Gallery.The artist announced the news this afternoon on his Facebook page.

Mr. Johnson is a conceptual sculptor whose pieces have ranged from severe minimalism (a box with two blocks of wood resting on it) to incredibly intricate–like his maple wood sculpture of an apple core made of a network of intertwining staircases.

This is the second Taxter & Spengemann artist this week to land at a new gallery. Earlier, we reported that Frank Benson would now show at Andrew Kreps. Pascal Spengemann also found a new home this week as director of Marlborough Chelsea.