Republican Congressman Michael Grimm, who represents the 13th District in Brooklyn and Staten Island, will be sitting next to his frequent television sparring partner, Democratic California Congresswoman Loretta Sanchez, at next week’s State of the Union address.

“While Congresswoman Sanchez often has opposite views and tries to hog the camera in interviews, I am pleased to be sitting with her,” Congressman Grimm said in a joint statement announcing their State of the Union date. “The country expects and deserves Members of Congress to work together, find common ground, and put America first.”

Congresswoman Sanchez said she was looking forward to sitting next to Congressman Grimm “even though I’m constantly having to correct Michael on his positions during our joint interviews.”

“I always enjoy a good, bipartisan spirited debate with him and we need more of that in Congress,” she said. “I look forward to us attending the State of the Union together and look forward to discussing an agenda with Michael that will move our country forward in 2012.” 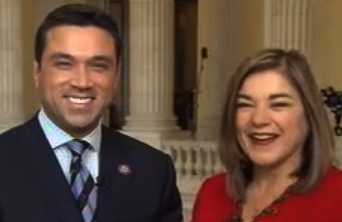