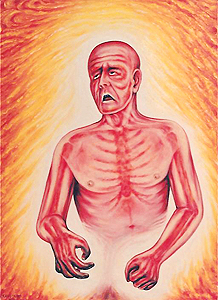 A Michigan judge dismissed the case regarding the  ownership of the artwork of the late Jack Kevorkian, stating that the dispute was already being taken up by a federal court in Massachusetts.

We told you a few months back about the claims of the Massachusetts-based Armenian Museum that they own 17 paintings that Kevorkian allegedly left to his niece, along with the rest of his estate, in a will written about two weeks before his death. According to Oakland County’s Daily Tribune:

“Attorney Gerald Gleeson represents the museum and said on two occasions that statements were made indicating the pieces were donated. The museum finds it frustrating Kevorkian’s wishes are being ignored, he said.”

One of those occasions reportedly involved Kevorkian’s sister attending her brother’s opening at the museum while he was still in prison. There, the museum says she donated the paintings on behalf of her brother.

The artwork has been on loan to the museum and currently rests in storage.