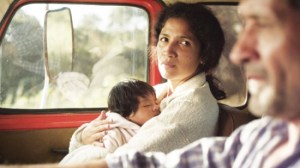 The New Directors/New Films festival, presented by the Museum of Modern Art and Lincoln Center, has announced the first seven films that it has selected for its 2012 edition.

On the list of the helming debuts at this year’s fest are “Las Acacias”… juvenile-detention drama “Breathing,” directed by Austrian actor Karl Markovics; Julia Murat’s “Found Memories,” a portrait of a fictional Brazilian town that picked up an award at the Abu Dhabi Intl. Film Festival; and “Twilight Portrait,” Angelina Nikonova’s film about the aftermath of a rape in modern Russian city.

Other sophomore helmers on the ND/NF lineup are Anca Damian, with her animated Romanian doc “Crulic: The Path to Beyond,” and “Porfirio,” Alejandro Landes’ Colombian entry about a man paralyzed from the waist down when he’s caught in the crossfire of a police shooting.

The festival runs from March 21-April 1, and marks the event’s 41st iteration.