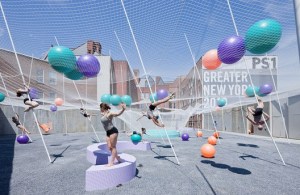 The courtyard, in sunnier times.

Later this month, MoMA Ps1 will open a 500-person “performance dome” in its spacious courtyard, part of its upcoming “Winter Open House” and set to coincide with a show by the painter Henry Taylor.

The Queens Chronicle describes the performance dome as “a white dome resembling a cross between an igloo and the medical facility where ET was quarantined.”

Actually that was just their house, in E.T. The dome opens January 29.