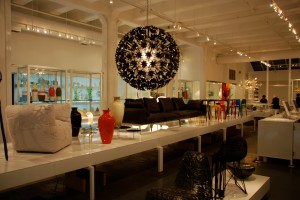 The inside of Moss. (martin.farrington/Flickr)

SoHo design store Moss, known for its bracingly white walls and shelves, and the exotic contemporary furniture it sells for substantial sums, announced that it will close its doors at 150 Green Street. Owners Murray Moss and Franklin Getchell told The New York Times that they had tired of running what felt like a “free museum.” Sales had apparently dried up in recent years.

Messrs. Moss and Getchell said that they plan to inaugurate a smaller space sometime in the future and launch Moss Bureau, “a consultancy that will allow Mr. Moss to monetize his position as a design deity,” according to The Times. (Thank you to Greg Allen for bringing this bit of text to our attention.)

If you’re feeling dramatic, the closure could be interpreted as a sign that a chapter in the history of SoHo, the neighborhood once known as Hell’s Hundred Acres, is coming to a close, with the design stores that came in as galleries moved to Chelsea being pushed out by corporate retail giants.

Disclosing his plans to close, Mr. Moss told a really great story to Blouin Artinfo about what happened after he approached Tupperware about the fact that they never held the famous Tupperware parties in Manhattan back in the mid 1990s:

“They allowed me to have a Tupperware party at Moss, and I did a dramatic installation of Tupperware. Looked fabulous. They bussed in, like, 18 killer Tupperware saleswomen. We served margaritas. And, excuse the ’80s term, it was like the A-list. I had the editors from Vogue there. You know what the average sale was? Like $2,000! Do you know how much Tupperware you have to buy to spend $2,000?”