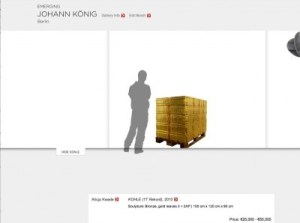 A screen capture from VIP 1.0.

Let’s assume for a moment that Amazon.com is the best way to sell something to someone else online, the Platonic ideal of website retail. Imagine a version of Amazon.com that exists for just one week a year and requires you to have a little instant message conversation with a salesman as the first step to any transaction. If he likes you, or you’re known to him, he might take you to a “private room,” identical to any other inventory page, but where they keep the really good thriller novels. Fair warning! This version of Amazon.com has a reputation for being a little quirky technically as well. The chat function isn’t reliable, and the whole site once had to be taken offline for several hours, during that week of its existence.

This, in a nutshell, is the VIP Art Fair, a online endeavor that resembles no other online marketplace—and why should it? They’re selling works of art for up-to-seven figures, not thrillers—and whose very name seems antithetical to the professed egalitarianism of the Internet (though it stands for Viewing In Private). VIP was founded two years ago by New York dealer James Cohan, Internet entrepreneur Jonas Almgren, and their wives Jane Cohan and Allesandra Almgren, and earned many blue-chip supporters through its fidelity to the model of the art fair with private viewing rooms and constant on-hand gallery representatives. A debut fair last January that attracted top galleries like Gagosian, Pace and David Zwirner saw technical errors and frustration, and now, gearing up for its second edition this February, the site has embraced its technology side with a new staff and $1 million in angel funding from investors and collectors Selmo Nissenbaum, and Philip Keir.

The investment, Ms. Cohan said, represents a confidence in the company’s ability to change the way people buy art online, and in a marketplace that’s since seen new competitors like Art.sy and Paddle 8.

“There’s a journalist that I met who teaches at the Stamford MBA school who once told me that change rarely happens from within an industry, usually it comes from the outside,” Ms. Cohan told The Observer. “So he found us, as a case study, very unusual and very interesting. And I think what he’s saying is both true and untrue in terms of galleries and art fairs.”

“This one obviously is pushing the boundaries,” she said of VIP, “and it’s a totally different delivery system for that art fair, but it’s the fundamental concepts of the fair we’re working with.”

The technical failings of VIP’s inaugural edition are infamous among a segment of the art world, but the main issue was the instant messaging system—one of the fair’s big selling points, since dealer-buyer interaction was touted as equivalent to that of a real-life encounter one might have at an art fair. Sometimes it didn’t work at all, sometimes it would cut out 30 minutes into a conversation. One dealer said a message intended for one client was sent to another. Eventually it was temporarily disabled, and dealer interaction went to the phones, email, or Skype—a route that dealers pursue on their own anyway.

The chat function was the source of all of the site’s problems, said VIP’s vice president of engineering Severin Andrieu-Delille, who joined the company after the first fair and built a revamped site based on the model pioneered by the outside firm Supermetric for the 2011 edition. The chat system was overwhelmed by too many users–in a way, the fair was a victim of its own success, with advance marketing bringing in not just interested collectors, but many gawkers and others who’d somehow wrangled access on the first day–and poorly structured so that if it failed it took the entire site down with it. Mr. Andrieu-Delille has since broken out the chat program, using an open-source, already established chat function not tied to any other part of the system. Asked about the ceiling for how many users might use the new system at any given time — VIP has 50,000 prospective buyers this year, up from 40,000 last year—Mr. Andrieu-Delille said there was none.

“Each of the servers is built on its own auto-scaling server, based on load or demand,” Mr. Andrieu-Delille said. “It’s all built to scale and we’re set for very, very high traffic.”

Last year’s hiccups didn’t go over well with some participating galleries. A group of them rallied together for a partial refund, which they received. A number of prominent galleries that participated last year declined to sign on for a second round, among them L&M, Gladstone, Cheim & Read, Gavin Brown’s Enterprise, Michael Werner, Sean Kelly and Metro Pictures. Most of those galleries declined to comment for this article, or cited other business obligations as their reason for not participating in VIP 2012. This was the case with Gavin Brown.

“We’ll definitely be watching,” said sales associate Hannah Hoffman, who handled the gallery’s involvement in the fair last year, “and seeing how it goes this year, but last year we poured a lot into it and felt like we did what we could do. Now we think that it’s the time to watch what everybody else is doing and then maybe we could see for 2013.”

Those who returned from last year were given a discount for their loyalty, some with personal reassurances from fair honchos. Laura Pinello, director at the Peter Blum gallery, spoke with VIP’s director Noah Horowitz, who has since left the company to become a managing director of the Armory Fair.

“He explained a lot of the upgrades to the website, so we decided we’ll give it another shot out of respect to James and the idea,” Ms. Pinello said.

VIP is not a hard sell for most galleries. With booths priced between $3,000 and $20,000, it’s still significantly cheaper than any other in-person fair, and minus the cost of schlepping works. In an article about the first VIP, Mr. Cohan compared the price to that of an ad in Artforum.

This year VIP will host four fairs—the main one, and three smaller ones focused on print, photo and contemporary works—but with the new technology, the limit to how many fairs VIP may hold lies only with how many collectors are willing to attend.

If all goes according to plan, by 2013 VIP hopes to hold a number in “the low double digits,” according to Lisa Kennedy, the fair’s new CEO, who came to the company this year from Amazon subsidiary Quidsi Inc. The goal, Ms. Kennedy said, is to make sure their clients are not overwhelmed by too many events.

“There are tons of flash sites in the world; most of them email their audience every day and then over-email their audience,” Ms. Kennedy said. “Our objective is to create really incredible events. We want our users to open emails from us because they will know that when they hear from us it will be with something worthy of their attention.”

This year’s main fair sees around 115 participating galleries, some 25 percent of them new, scoring a total nearly equal to last year’s number, just over 130. One addition is New York secondary market dealer Christophe Van de Weghe, who was aware of last year’s technical snafus, but signed on without any sort of inquiries about the updated site.

“I think that they know if they would have these kinds of problems a second year, then their business is going to be finished,” he said.

“I don’t have any expectations—what I really want is to meet new clients because that’s what we art dealers like, creating new contacts,” he added, saying he hopes to reach buyers in countries where he’s never done business before. “It’s more of an exciting adventure for me.”

Last year, many dealers chalked their participation up to the ability to reach potential clients from new markets like China. Demographic information from VIP said that its visitors in 2011 came from 196 countries, with only 28.1 percent of those users based in the U.S.

Paris and Salzburg dealer Thaddaeus Ropac was frustrated by the first fair’s problems, but has embraced the online format as a platform to attract new clients. His booth will host one-artist shows each day of the fair, and on opening day of VIP 2.0 the booth will offer a live webcam performance by Terence Koh.

Mr. Ropac is not a proponent of online buying—speaking of favoring the brick-and-mortar gallery model over anything else, he mentioned that he is set to open a massive new 30,000 square-foot space in the northeast section Paris in the near future—but he sees the fair as an innovative way to reach a new audience. In fact he’d actually rather people didn’t buy from him through VIP– or at least, not immediately.

“People do it all the time,” Mr. Ropac said. “They get the catalogue from Sotheby’s and bid without ever seeing the work in person, and then they’re not happy with the piece because the color isn’t right or something. I don’t want to encourage these sales because I want to encourage the physical experience.”

The way ahead for VIP still lies in navigating the expectations for an art fair and the modern art market, said Ms. Kennedy, the fair’s CEO.

“What we are doing is changing the behavior in how art is experienced,” she said. “The shift in the way in which collectors and dealers communicate—passing JPEGs back and forth—is happening already day-to-day, week-to-week.”