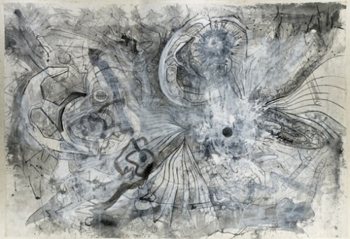 “This is a man who never stopped laughing, who always spoke in riddles, who identified with the joker, and is always actively engaging us with that perplexity, the idea of paradox in paintings,” biographer Justin Spring proclaimed of artist Roberto Matta at Pace Gallery’s West 25th Street branch last week. He added, “This is a starting point, rather than a definitive moment for Matta.”

This starting point was a panel discussion tied to the exhibition “Matta: A Centennial Celebration,” which runs through Saturday, and Mr. Spring was sitting under the artist’s gigantic black and white painting Architecture du temps (un point sait tout), which resembles a wavy, Abstract Expressionist take on outward-moving cartoon machinery. (Pace just sent over a video that they recorded of the event, if you would like to see it all.)

Mr. Spring, who penned an essay for the show’s catalogue, was joined by an impressive roster of experts: Federica Matta, the artist’s eldest daughter; Elizabeth Smith, the former curator of the Museum of Contemporary Art Chicago; and critics Donald Kuspit and critic Martica Sawin. The crowd was a mix of middle-aged, elderly professionals, arty New England types, interspersed with what appeared to be Wall Street denizens–a nice haul.

Though Matta was voted one of the 10 greatest living painters by a jury of 100 art-world luminaries back in the 1970s, panelists complained that his star has since dimmed in comparison to many of his contemporaries. The boyish-faced, silver-haired Mr. Spring touted him as “the last great Surrealist–he brings Surrealism all the way through Abstract Expressionism and out the other end.”

Mr. Kuspit (who authored the timely essay “The Greatness of Matta“) credited the man with “revolutioniz[ing] perspective” and defended Surrealist ringleader Andre Breton’s assertion that “non-figurative line placed [Matta] in advance of other painters.” In Mr. Kuspit’s estimation, Matta’s lack of recognition is due to a “narrow-minded” view of contemporary art perpetrated by the late critic–and dependable whipping boy–Clement Greenberg.  Both scholars won applause.

Could Matta, the man, be partially to blame for the descent of his legacy? Panelists described Matta as something of a charming little rascal, though some may recall that, in the 1940s, he had an affair with the wife of his friend Arshile Gorky, who soon after committed suicide. (New Yorker critic Peter Schjeldahl once described Matta as a “Surrealist, womanizer, and not to put too fine a point on it, jerk.”)

Mr. Spring and Ms. Sawin provided a bit of biography for the uninitiated: born in Chile in 1911 and trained as an architect, Matta met Salvador Dali and Breton in the 1930s and officially aligned himself with Surrealism. In Paris, he befriended Marcel Duchamp and Yves Tanguy. In the United States in the 1940s, he had a significant influence on Abstract Expressionists Robert Motherwell and Jackson Pollock; at one point, Matta was so close to Gorky that their drawings were nearly indistinguishable. Though his work had expressionist qualities, Matta stuck with Surrealist representation until the end. Remembered for his ferocious libido, he had four wives and six children. He died in 2002.

Federica Matta, a youthful-looking, black-velvet-attired woman, shared that her father–to whom she referred simply as “Matta”–sought to serve as a common cypher for the collective unconscious. “[Matta felt that] the human condition is unbearable,” she said, recalling his desire to “communicate torture.”

“I remember him speaking and putting himself in that state, to represent the unbearable,” she said. “[He felt that] whatever reality is unbearable, [you] can transform by saying it and showing it.”  Which is perhaps part of the reason Matta never aligned completely with Abstract Expressionism, many panelists agreed: he felt that representational forms were essential to that kind of communication.

“The big thing of Matta is that we are all human,” said Ms. Matta later, adding a bit defiantly: “Matta didn’t care about art history.” That aside, if Pace and its panelists have their way, art history will soon care a great deal more about Matta.