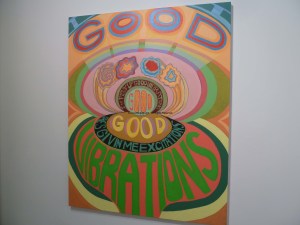 A work from the exhibit (Photo courtesy of Accordingtog.com)

Emerging painter Erik den Breejen was slapped with a lawsuit after he informed Beach Boys lyricist Van Dyke Parks about a recent series he exhibited at Freight and Volume gallery based on the band’s infamous Smile album. As Artnet‘s Rachel Corbett reports, it wasn’t quite the reaction he expected.

Mr. den Breejen’s paintings place multicolored text blocks with Smile lyrics in various Smile-like shapes (e.g., a smile). “Mr. den Breejen’s show offers a useful occasion to ponder what it is about art in our time that popular music should have so captivated its soul,” Ken Johnson said in his review of the show.

To most people quoted in the article, the lawsuit seemed a bit strange.

“If it were a Richard Prince or an Andy Warhol situation it would be handled very differently,” [Freight and Volume owner Nick] Lawrence said, “but Erik’s an emerging artist.” The works, a little more than half of which include Parks’ lyrics, sell for between $1,000 and $14,000.

Sale of the paintings has been delayed until the matter is resolved.