ROCKLEIGH – The Bergen County Democratic Committee is on the rise and U.S. Rep. Steve Rothman, (D-9), Fair Lawn, is hoping to ride the upswing to victory. The problem: it’s a primary victory, the messiest kind.

The only thing standing in Rothman’s way is U.S. Rep. Bill Pascrell, (D-8), Paterson, and if it were necessary, Pascrell would actually stand in his way.

“They’re not going to know what hit them,” he told PolitickerNJ from his table at the Bergen event. The only thing standing in Pascrell’s way is a district engineered to his detriment by the Republican Congressional Redistricting Commissioners. And Rothman.

Up by the New York border tonight, Pascrell bought an entire table at the $500-per-seat affair, an ally said. The recurring theme Team Pascrell is espousing: in 2010, Pascrell took the helm of a capsized ship in Passaic County after their superstar sheriff bailed – and won big; at the same time Rothman’s under-ballot in Bergen County tanked.

The Paterson native has been making a point of showing up anywhere and everywhere Rothman is, like the Bergen County freeholder reorganization meeting. Rothman did not return the favor when the Passaic County freeholders gathered.

“We welcome everyone here,” Rothman told PolitickerNJ. “(We’re) celebrating with people from all over the state.” It’s been 34 years of annual Bergen Democratic galas for Rothman, so he can work the room. In between handshakes, he said the mere presence of Pascrell in Bergen County does not mean the Passaic County native is making inroads.

“Not in Bergen County, not in Hudson County,” Rothman said, before presenting the chunks of Pascrell’s base he is tearing away: Passaic City Council president and Assemblyman Gary Schaer, (D-36), and many other Jewish Democrats in Passaic and Clifton; the Hispanic Alliance of Passaic County, which represents 120 religious congregations; and the Service Employees International Union, which Rothman said has one of the best GOTV operations around.

Pascrell counters with a slew of unaffiliated and Democratic-leaning voters in Paterson at the ready; the Communications Workers of America Trenton-based Local 1039; and a ballot position disadvantage in Bergen and Hudson counties.

In Rockleigh, the banquet hall was spacious, too spacious to focus the attention of the crowd to the stage. Tables were filled with interested parties, many of whom stayed home from these events over the last few years. They returned and were joined by some statewide lawmakers who came to kiss the Bergen ring: state Sens. Dick Codey, (D-27), of Roseland; Barbara Buono, (D-18), Metuchen; Nick Sacco, (D-32), North Bergen; and Nellie Pou, (D-35), North Haledon.

The crowd stood to cheer Rothman when he took the stage, but the wonkish former mayor offered little more than a humdrum catalogue of thank yous and congratulations to the cavernous room. He singled out BCDC chairman Lou Stellato, who has a winning streak going, and invited any competitors for office to come through Big Bergen – the only hint of a barb at his competitor. “You’ve got to win first in Bergen County,” Rothman said.

Pascrell was twenty feet away stage right, and wasn’t offered the microphone. Asked how the reception has been for him in Bergen, Pascrell said it took him 45 minutes to get to his table because of handshakes and hellos. Pascrell said if he had been redistricted into the right-leaning boundaries of U.S. Rep. Scott Garrett, (R-5), Wantage, like Rothman was, he would have fought the good fight just as he vowed to do before the map-drawing process began. “I always keep my word,” Pascrell said. “(Rothman’s) already conceded one Democrat. Is this what we fight for? Is this how we help the middle class?”

Both of the Democratic congressmen appeared shaking hands with President Barack Obama this week as the president made his way to and from the lectern for the State of the Union. But Pascrell, who backed Hillary Clinton against Obama, was the only one of the two to lean in for the ear and land a laugh with the prez. What did he say?

“Relax, you gotta give four more of these,” Pascrell said, with with a slap on the back.

Rothman is moving from Fair Lawn into Pascrell’s district – maybe Englwood where he served as mayor – though he denies the accusation that he’s chasing Pascrell with friendly fire. His numbers are significantly better against Pascrell than against Garrett, regardless of how much support the DCCC offered. The district is made up of mostly Rothman’s current constituents. “This primary contest,” he said, “is the decision of the Republican redistricting commission.”

And while the numbers are solid and Bergen is strong, there is also still one thing standing in Rothman’s way. 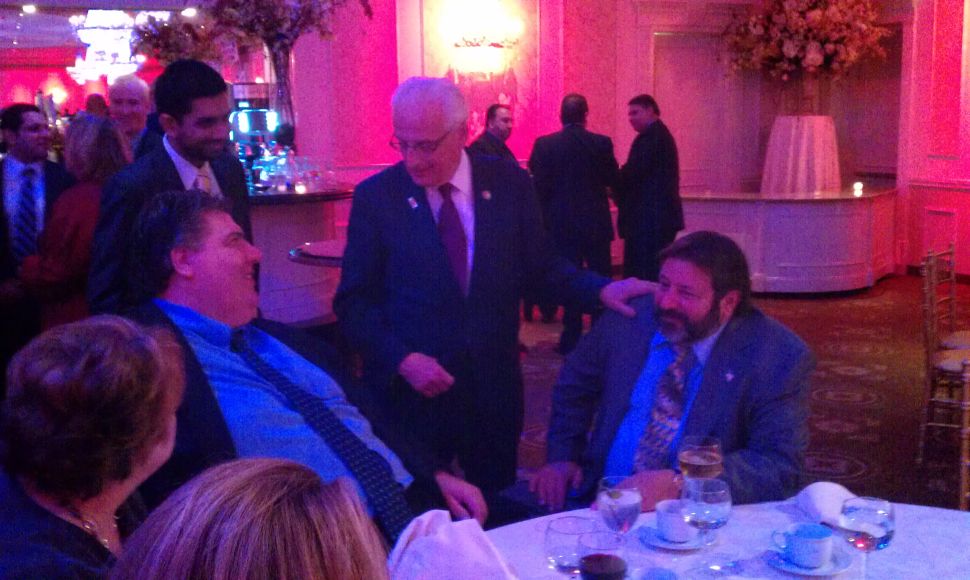