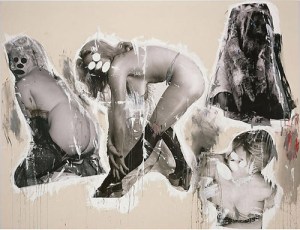 The legal war between Richard Prince and Patrick Cariou, the photographer whose photos Mr. Prince used to create most of the paintings in his 2008 “Canal Zone” series is raging on, and a few hints of the operation of the Gagosian empire are coming to light in new court filings, as Artnet has noted.

To recall, Mr. Prince and the Gagosian gallery, which shows his work, lost a court battle over the paintings last year, when it was ruled that his appropriation of some of Mr. Cariou’s photographs of Rastafarians was not sufficiently “transformative” to qualify for protection under fair use aspects of copyright law.

Mr. Prince and Mr. Gagosian have since lawyered up, hiring powerhouse film Boies, Schiller & Flexner on appeal. Key to their new argument is that Mr. Prince’s previous testimony, that he had not attempted to transform or comment on Mr. Cariou’s work, be set aside since a “core post-modern belief [is] that an artist’s intent is irrelevant.” It’s the “Author Is Dead” defense, basically.

Yesterday, Mr. Cariou filed a brief with the court, lambasting Gagosian-Prince’s appeal with a bit of wit:

“Fittingly perhaps, in a case involving appropriation art, appellants’ brief is ‘post-modern,’ questioning basic concepts such as: what is a fact, and what is properly before an appellate court on an appeal?”

Some of the most revealing material comes in a section about the ways in which Mr. Cariou alleges Mr. Prince and the gallery “exploited” his work. How did they do this? By launching a massive publicity campaign, printing a catalogue and having an awesome dinner party. (In other words, doing all the things one usually does when having a gallery show.)

The dinner party, Mr. Cariou’s lawyer writes, was a cause of careful planning on the part of Mr. Gagosian. Wrote one employee: “Larry would like the opening and dinner to be ‘kick ass’ so please invite celebrities/moma/gugg/whitney curators and other clients who will BUY his work.”

Mr. Gagosian wanted “buzz,” according to court documents. And he got it. And he’s getting it now.

There’s also a passing jab at James Frey, who penned an essay for the “Canal Zone” catalogue, referring to him as “the notorious author of the bogus memoir, A Million Little Pieces.” It seems that a Gagosian employee told the catalogue maker to put Mr. Frey’s name on the cover page so that it could come up “if you Google James Frey.” Right.

Those curious about the business arrangement between Messrs. Prince and Gagosian may be interested to learn that they split sales 60-40 in the artist’s favor.

All told, the lawyers write, the “works of art hastily thrown together by Prince [he’s said that he made some in just a few hours] without much thought, result[ed] in proceeds of over $11 million plus additional bartered art and the sale of the leftover announcement cards to a poster company.”

Now Mr. Prince will have a chance to respond. We’ll see what happens.