I’ve never had an eating disorder. I did, however, have an eating problem, the way that Ted Striker from Airplane said he had a drinking problem before splashing himself with a beverage. I didn’t consume food: I just shoved it toward my mouth, usually while in the middle of doing other activities (reading, working, taking a bath).

I first realized this might be an issue in second grade, when a friend wrote a short story about me and read it out loud to our families. The tale, which was called “Princess Drew,” employed the thinly-veiled metaphor of a pig masquerading as royalty—the giveaway was when as she stuck her head directly into her golden trough. The story struck even my 7-year-old self as predictable, lazy, and incredibly mean-spirited. Fortunately, it had a happy ending: One glorious day, Princess Drew picked up a knife and fork and learned how to eat “like a real girl.”

I chose not to take the hint.

But earlier this year, my significant other and I were dining at an expensive sushi restaurant in London when I had what I’ll simply call a faux-raw. I was attempting to bite a piece of unagi in half, but was thwarted mid-nibble by an errant fiber of fish-something, and so wound up desperately shaking my head back in forth like a honey badger in order to bisect the eel before the whole delicately created masterpiece fell apart in my plate. The look on his face was one of such surprised anguish that I thought he’d accidentally swallowed a tablespoon of wasabi.

So when Shirley Schoonmaker, my Beacon’s High Society Etiquette Coach, asked me what I’d like to fix about myself next (having recently mastered the art of not walking like Samara, the scary dead girl from the horror flick Ringu), I gamely replied, “Let’s do brunch!”

Schoonmaker chose the venue: the acclaimed Cafe Boulud, a French restaurant I would normally never set foot in. There was more than one fork, for example, and way too many vegetables that I didn’t know how to pronounce. It was also quiet, too quiet.

My first crisis occurred two seconds after I walked in and realized that I had brought no cash with which to tip the coat check. I considered running coatless to an ATM after the meal, but would the coat-check lady break a twenty? Or was it better etiquette to throw down a few quarters, mumble an apology, and run like hell?

When Ms. Schoonmaker arrived, I was already seated in a corner table, facing a mirror so I could take in the full effect of my gastronomical horror show. At the very least, I was sitting up straight.

“So, what do we do with our napkins?” Ms. Schoonmaker asked while taking her seat. I held out my napkin, studied it, and then wiped my nose. (Did I have an errant booger?)

“No…napkins go on the lap,” she informed me.

“Oh,” I replied, wiping my nose with my sleeve. (Still had to get the snot off!)

When our amuse-bouche ricotta balls arrived, I reached over the table and gently tried to spear one, instead succeeding in mashing the sphere into a mound of fried grits. Mindful of my sushi fail, I then proceeded to stuff the entire, burning ball of carbs into my mouth.

“Too hot?” Ms. Schoonmaker asked, as my eyes watered and flames shot from my nostrils. “For little plates like these, you never want to reach over the table, but bring the container to you.” She demonstrated. “Now, see, I’d cut it in half. Look at all that steam! These things must be very hot!”

Brunch, I soon discovered, was my least favorite meal of the day. Apparently it lasts three hours (so was that technically lunch?), during which time I learned several important lessons. One, you must not eat the bread by first turning it into a butter sandwich but rather pick off tiny little chunks and delicately pop them into your mouth (a crumb disaster waiting to happen). Two, the polite way to slurp Pho noodles in a French restaurant is to not do it at all, because while it is apparently acceptable to dunk one’s head into a bowl in Eastern cultures, the Europeans aren’t down with it. And three, when spearing food, turn one’s fork and just stab a morsel rather than frantically chasing it around the plate in a would-be scooping motion. Got it!

Stealing a peek at myself out in the mirror, I looked like Sloth from The Goonies, demanding a Baby Ruth. But Ms. Schoonmaker wasn’t fazed, moving on to more advanced lessons, such as the differences between a white-tie dinner and a black-tie dinner. Apparently, white-tie—for instance, a reception for the Royal wedding—involves each woman, wearing elbow-length white gloves, being escorted by a strange man she’s paired with. These pairings are written down on little slips of paper, which the men pick up on a table during the cocktail hour. Since I doubted I’d ever be invited to something that fancy—it sounded like an upper crust key party to tell you the truth—we moved on to black-tie affairs, dining out, “family style” dining (never ask for seconds unless they are forced upon you, never take more than you can eat, finish everything on your plate), and finally, my favorite: “home meals.”

“This is one of the few meals you can eat with your hands, because what you do in the privacy of your own home is your own business,” Ms. Schoonmaker told me. “By the way, why did you order coffee before your meal?”

Well, because I was tired.

“Coffee is served after a meal,” she chided. “Also, dining out is a social activity, not a time to make yourself full. If you’re hungry, eat before you go out, or after. You should be so socially engaged that your soup gets cold.”

I guilty slurped the last of my Pho.

After several more minutes of difficult small talk about our New Year’s plans, Ms. Schoonmaker suddenly remembered that she had to leave for London in several hours.

“See you soon! Next time we’ll work on how to make polite conversation!” she promised (threatened?), sliding out of the booth.

On my way to the office, I bought myself a Double Quarter Pounder with Cheese Meal.

Now if only I could find out what to use the napkin for. 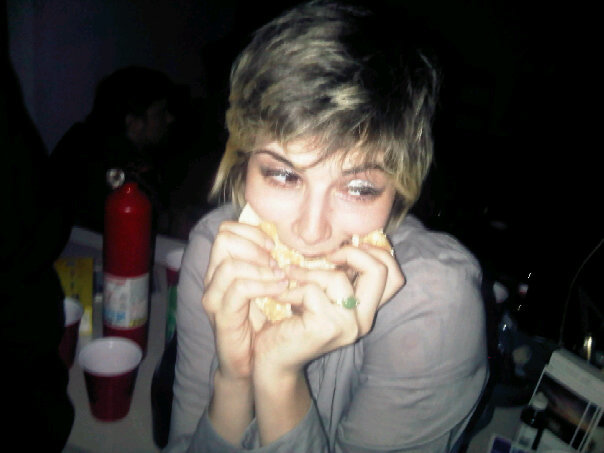