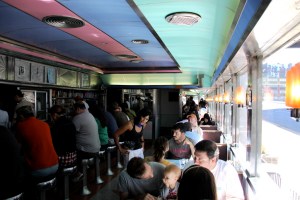 Describing one visit, Mr. Sifton wrote that "M. Wells took on some of the aspects of an animated hipster version of Hopper’s 'Nighthawks,' a Paul Thomas Anderson pilot for HBO." (ChrisGoldNY/Flickr)

Back in April, when now-retired Times restaurant critic Sam Sifton reviewed the M. Wells restaurant in Long Island City, awarding it two tony stars, he ended on a grand note: “You know those biographies where the great artist first moves to New York, has a cold-water flat in a desolate part of town? We are in that chapter now.”

The restaurant, known for serving a wild assortment of offal (pig tongue, veal brains!), closed following a disagreement with its landlord over rent in August, but it now appears that its next chapter may begin soon. The Daily News reports that the restaurant may open an eatery at MoMA P.S.1, serving “bento box-style meals” made mostly through sous-vide cooking.

Rumors about the restaurant have been floating around for a little while, but it now seems that co-owner Hugue Dufour discussed plans with the Canadian Broadcasting Company, leading to the Daily News piece. The museum is declining to comment.

Here’s hoping this all works out.