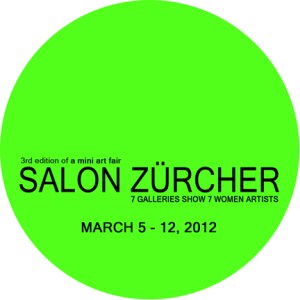 During the second week of March, New York will be filled with art fairs: the Armory on the piers, Scope across the street, the Indepedent in the former Dia building and Volta on West 34th Street. Amid that frenzy, the tiny seven-gallery Salon Zürcher, run by the Zurich/New York gallery Zürcher Studio, will return for its third outing.

This year’s Salon Zürcher, which is set to run March 5-12 (longer than any of the other fairs), will see each of the participants exhibiting a single female artists. Seven galleries, seven ladies: sounds pretty straightforward, and relatively laid back compared to other shows. The lineup for the fair is as follow: