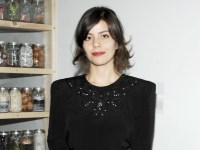 At MOCA, North Miami, Ms. Katrib organized solo exhibitions with Cory Arcangel and French duo Claire Fontaine, as well as starting “performance and workshop programs.” She’s now at work on a conference to toast the 20th anniversary of Bard’s Center for Curatorial Studies, from which she holds a master’s.

In other SculptureCenter news, the 84-year-old institution just launched a Tumblr account, and the kunsthalle now has on view a two-person show with Lucy Skaer and David Maljkovic, and a group show of artists from its “In Practice” program, which includes sexy “crush” videos by A.K. Burns and a pleasantly heady multimedia project by Keith Connolly, Ethan Ham, and Tom Thayer.

The touring retrospective of the Postminimalist hometown hero Bill Bollinger is set to open there on April 22.