Nothing screams “The Mayans will be proven wrong this year!” quite like watching a young man swing from the rafters after hanging himself in a very loose adaptation of Macbeth, but for fans of the interactive production Sleep No More, there was no better way to ring in 2012. After getting an invitation from the Thane himself asking for our attendance a special gold and silver party at the McKittrick Hotel–where Sleep No More has been in residence since March with co-production companies PunchDrunk and Emursive–we arrived up not knowing quite what to expect.

Would we be allowed to remove our Eyes Wide Shut Italian Renaissance-style masks and talk after midnight, or, going with the show’s traditional rule, would we be forced into an anonymous silent cheer when the countdown reached zero?

We shouldn’t have worried: Emursive and Punchdrunk have done nothing except usurp the expected, and when the audience was corralled into the ballroom at 11 p.m., it wasn’t just Macbeth’s body that dropped: suddenly, the drapery from one wall descended, revealing a fully-stocked open bar. A strange, Zoolander-ish DJ appeared from one of the box seats, piping in DJ-remixes of dancehall music…1920’s dancehall, that is. (Anyone looking for a dubstep version of ragtime classics should look into hiring this gentleman for their next event; he was marvelous.) It was a full fantasy played out on three levels of the hotel: besides the ballroom, bars were open in the faux-lobby “scene” room and in the cabaret that serves as the entrance to the show. Neat trick, not having to pay $8 for a drink (as the usual scotch and soda in the  cash-only bar in caberet will cost you).

And perhaps this was just something we missed during our first visit to the McKittrick, but did Sleep No More always have a hard candy emporium room, or was that just a special little kickback to the guests who paid $125 a ticket to come to the pre-show? (Those wanting entrance at 12:30 could make it for only $100…only $20 over regular admission price, but without the cost of having to be silent for three hours.) The males in our company had a delightful time stuffing their pockets full of hard licorice sweets, while the ladies–sans clothing holes to hoard things in–had to suffice by shoving a bunch of old mints into their cheeks and saving them for later; like chipmunks expecting a cold front.

Midnight was count down by cast members dressed up as different numbers, and when a working clock that read “Happy New Year” reached its final “r,” several peacocked dancers in shimmering skivvies and flesh-colored leotards jumped up on what was previously the banquet table and proceeded to can-can. We finagled our way into the VIP lounge, where we shared a whiskey with the father-in-law of one of the producers, who, much like another tragic Shakespearean king, was affectionately showing off his three daughters to friends and close relations.

Before the bell struck twelve, we overheard the performer who had played our Macbeth engaging friends by dropping his sulking leer for a more fay posture, while the bartenders retained their English brogue throughout the course of the evening. (Now we know why none of the characters in the show talk…it would totally ruin the effect!)

As we were wished a solicitous New Year’s Eve by a young woman serving drinks with a Scottish lilt, we tried to decipher whether her accent was real, or, like so many other things in Sleep No More, a pure fabrication. Either way, we agreed, it had the desired effect of keeping us in the realm of the source material for the rest of the evening…Shakespeare by way of Hitchcock; the perfect dreaded doomsday fantasy to ring in the end of days. 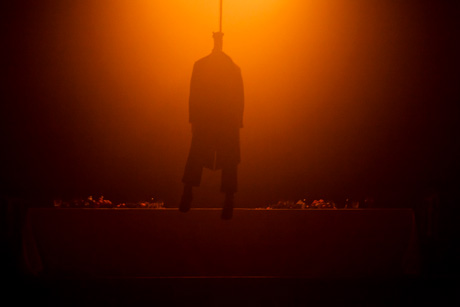