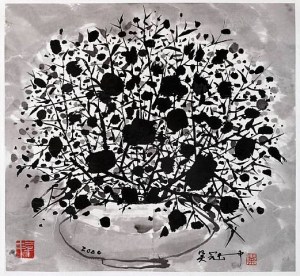 A work by Wu Guanzhong.

Sotheby’s has sued and outed a pair of Chinese bidders who have not yet paid for their winning lots at auctions.

One of the buyers has failed to pay for her $8.9 million bid for a work by Zao Wou-ki, which actually set a new record for the artist. According to the Financial Times:

“Ma Dong, a man from the Daxing district in Beijing, won three paintings by bidding just under HK$50m in total on October 4–including one by Zhang Daqian, one of the most respected 20th century Chinese artists. He has yet to pay for any of them, according to the auction house.

On October 3, Ren Chunxia, a woman with an address in Jinan, eastern China, won two oil paintings by the Chinese master Wu Guanzhong with bids of HK$18.6m and HK$26.4m respectively. These were paid for within the standard 30-day limit. However, she has yet to pay for a painting by the abstract artist Zao Wou-ki, which she bid HK$69m for on the same day. That price was a new auction record for the artist and nearly double the high-end of Sotheby’s pre-sale estimate.