If only if the rest of government worked this way

Bad news first: Stephen Colbert has put an end to his bid for president of South Carolina by disbanding his exploratory committee, as he announced last night.

Good news: He can now regain power of his super PAC, after running through a messy gauntlet with its current gatekeeper (but in no way associate) Jon Stewart.

Even better-best news: According to an F.E.C. filing made at 12:01 this morning, the political action committee–which during the regime change two weeks ago renamed itself “The Definitely Not Coordinating With Stephen Colbert Super PAC” but has since returned to its “Americans for a Better Tomorrow, Tomorrow”…though it’s easier to just say Colbert’s Super Pac–has raised $1,023,121.24.

The New York Times lists of some of the celebrity and organizations that are named as donors for the committee, though no one, not even Hot in Cleveland star Laura Sangiacomo or former West Wing hottie Bradley Whitford, has confirmed that they put money into the organization that released videos encouraging people to vote for Herman Cain after he dropped out of the race.

While we’re glad to have gotten a lesson on how super PACs work, we’re wondering where that million plus bucks is going now that it’s back in Colbert’s control. Though lord knows he fought long and hard for it last night; wresting control from a reluctant Mr. Stewart in a showdown that could only be described with the phrase “We have no words.”

And it looks like Mr. Colbert is already taking back control of his Super PAC’s website via newsletter:

Earlier tonight, I confronted Jon Stewart on The Daily Show, and chased him all the way to The Colbert Report, in the most action-packed TV crossover since that time Urkel guest-starred on Full House.

The way I see it, the Supreme Court said that money is speech, and Jon Stewart was hogging all my speech. Now I’ve taken that speech from Jon, making him like that movie “The Artist”: French.

At midnight, Colbert Super PAC will be filing our financial details with the Federal Election Commission. If you’re not currently one of the three Democrats or three Republicans on the F.E.C., you can read about it in the press release below.

Now if you’ll excuse me, I need to spend some quality time with my money.

And here’s the press release: 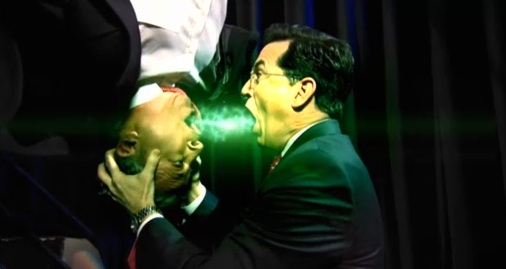