Update: Full video of the Colbert Super PAC transfer below.

Tonight, Stephen Colbert had some big news to share with America: since he was announced to be polling ahead of presidential candidate Jon Huntsman in South Carolina, he had decided to form an exploratory committee to become president of the United States…of South Carolina.

There was only one hitch.

Back in September, Mr. Colbert’s joke-super PAC was real-approved by the FEC. Unfortunately, you can’t have a super PAC and run for president, as Mr. Colbert’s lawyer told him on the show, because that would be considered “coordinating with yourself.” (This was once explained in a Colbert Super PAC Ad featuring Buddy Roemer, but sometimes we need to be reminded how the government works.)

Forced to make a decision, the recent New York Times Magazine cover model handed off his committee to his former coworker (and bagel/travel agency business partner) Jon Stewart, whose first act as president of the Colbert Super PAC was to change its name to “The Definitely Not Coordinating with Stephen Colbert Super PAC.”

Tellingly, the Colbert super PAC website has yet to change its name, though it does now have an opening letter from Mr. Stewart.

The punchline, of course, is that this is all actually legal, and that candidates use super PACS (which can raise unlimited amounts of money by getting donations from corporations and unions as well as individuals) as their own personal campaign machines all the time now. And as we learned tonight (or already knew!) you can still be close associates, friends, and/or business partners with the person in charge of the political action committee, as long as you aren’t “coordinating.”

We’d be outraged…except that we really want to see Mr. Colbert enter into the 2012 race. 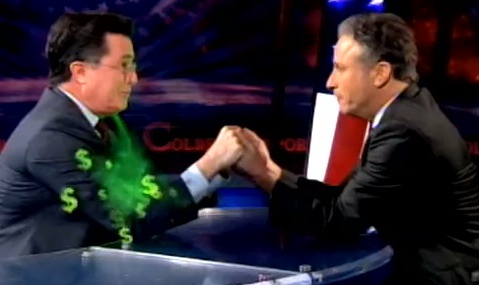