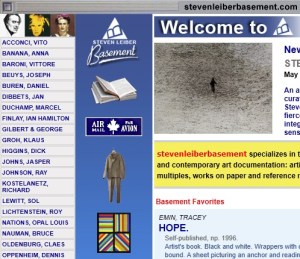 A palace of ephemera: a screenshot of Steven Leiber's website.

Steven Leiber, a San Francisco dealer and collector known for his voluminous holdings of artist multiples, ephemera and other fleeting materials, died on Jan. 28, following a lengthy illness, according to a notice in the San Francisco Chronicle. (Thank you to Artforum for bringing his passing to our attention.)

A graduate of UC Berkeley in art history and Golden Gate University in law, Mr. Leiber ran the website stevenleiberbasement.com, which offered a meticulously detailed look at his rather remarkable archive, and frequently pops up on Google searches for unusual material. Be warned when visiting the site: one can lose some serious time perusing the pieces he acquired over his decades-long career.