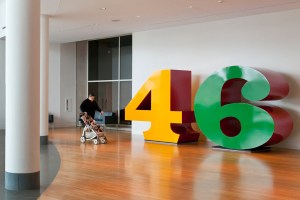 Hey all you art fans that also care about football! (We imagine you’re out there somewhere…) The Indianapolis Museum of Art is installing Robert Indiana’s sculptures Numbers (four) and Numbers (six) to celebrate Super Bowl XLVI being held in the Amateur Sports Capital of the World. Seriously–that’s Indianapolis’s nickname. Well, that and Circle City, the Racing Capital of the World and the relatively-more-regal-sounding Crossroads of America.

The sculptures will rest in the IMA welcome center until Feb. 9, when they will then go back to Robert Indiana’s complete numbers series, which rests in the IMA Alliance Sculpture Court. So, you know. Get ready for some football in the artistic, non-tailgating way if you’re into that sort of thing.