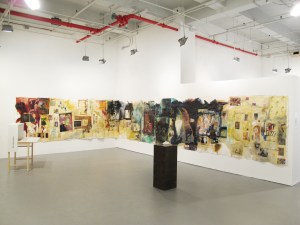 It may not be quick, but it’s certain: sometime after the Deluge, fish will learn to walk. At the entrance to the downtown alternative space White Columns, above a glass-covered bulletin board containing a Mary Cassatt reproduction, a handout about Fernand Léger, and Chloe Dzubilo’s 2007 marker-on-canvas announcement There Is a Transolution, hangs Maria Lassnig’s six-and-a-half-foot-tall 2009 painting Die Optimisten.

With the large, brash strokes of a magazine illustration, Ms. Lassnig shows a topless man and woman in a formless void, ankle deep in translucent green water, standing back to back but turned slightly toward the viewer. He has a big nose, an orange tone and a wobbly smirk; she has striking cheekbones and pink skin. Her eyes are on him, but he’s looking up, as if trying to remember something—or maybe forget it—as they both extend a thumbs-up toward the viewer.

Or rather, while it’s certainly formless, it could be that the background only feels like a void. At the tail end of the Modernist teleology—after iconoclasm; the erection of new idols of abstraction; the elaboration of theologies for those idols; the cataloging and ritualizing of the theologies into empty spectacle at the top and endless opacity at the bottom—the world is full of water. It’s not possible to point in any direction without pointing at something someone’s already done, and there’s nothing to breathe. But there are also, at this year’s White Columns Annual, an exhibition curated by Ken Okiishi and Nick Mauss, flickers of light-hearted optimism, because what’s full and fully decadent is ready to burst into something new.

In the gallery’s central room, two paintings—Alex Kwartler’s Wheel and Thomas Eggerer’s Downward (Dark Triangle)—hold back the void to make space for Michaela Eichwald’s 37-foot-long postindustrial cave painting Pofalla (willst Du mir jetzt komplett den Garaus machen?). Wheel is a large piece of plywood painted with a rough triskelion (think Back to the Future’s flux capacitor meets Martín Ramirez) in a thin, disconcertingly glossy layer of blue-, gray- and purple-tinted plaster. We can’t picture the void, but in trying, we pull it closer: as the plaster dried, it warped the board into concavity. Or, if we can’t picture the void, we can picture the way the void pictures us: Downward shows two male figures in bathing suits descending a perfect gray slope under a sky the color of greenscreen.

Knit together from multiple, fold-creased sheets of paper, decorated with letters, wallpaper swatches and show announcements marked out with teal X’s, rolling and roiling through stormy colors from nativity crimson and cheery aquamarine to fully rotten black, and ending in an uncomfortably dated photo of seven naked African men cutting up a baby elephant and an advertisement for a gelateria on the Isle of Elba, Ms. Eichwald’s Pofalla is not just more but distinctly other than the sum of its parts: it’s the jolting moment when decay becomes rebirth.

In another gallery, Adrian Piper’s I Am Somebody, The Body of My Friends #1-18, a suite of 15 color and three black-and-white photographs showing the artist posing with 14 men, 11 women and one girl in various permutations, constitutes a typology of social moments and contexts; in yet another gallery, a slide show of 35mm images by Alvin Baltrop, from 1974 to 1991, collects doorways, tar roofs, liquor stores, wet streets at night, sunsets, fire escapes, a man hunched over on the subway and a woman with an umbrella walking into a windy rain.

In a third space, Antoine Catala’s HDDH joins two HD televisions with a mirrored cylinder so that the facing images melt into each other; you may wonder when you walk in if it isn’t your eyes that are melting. When The Observer visited, the screens happened to be showing TV foodie Adam Richman as he described having once seen “a film Salvador Dalí made of his father and his father’s second wife eating sea urchins straight from the shell.”