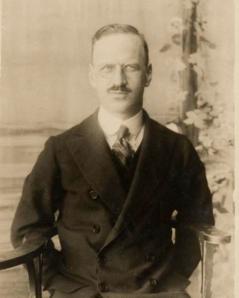 Over in The Boston Globe, art critic Sebastian Smee has a great review of a new book called Portrait of Murdock Pemberton: The New Yorker’s First Art Critic, which sounds wonderful.

It seems that Pemberton’s granddaughter, Sally Pemberton, came across “several suitcases stuffed with clippings, exhibition catalogs, photographs (including by Man Ray), letters (from Stieglitz, among others), and an unpublished memoir” in her mother’s attic, and the book was born.

Back in the 1920s and ’30s, when Pemberton was writing at the magazine (and hanging out at the Algonquin Round Table!), the editors were not so interested in art, particularly the modern variety. Here’s Pemberton telling an illustrative story:

“[New Yorker editor] Harold Ross, who was still adamant about the uselessness of art, one day said, ‘Pemberton, I don’t believe anyone reads your stuff, why don’t you pep it up, at least put an attractive heading on it.’ So the next issue I put on a heading ‘100 Nude Chorus Girls to March Down Fifth Avenue for the Sake of Art.'”

After that, Mr. Smee reports, there were no more suggestions of that sort. (Of course, Pemberton was later fired for a review, but that’s another story.)

A champion of female artists and a defender of modern art, Mr. Pemberton also reportedly had something of an irreverent streak. Writing in another magazine, he offered a series of 60 “impertinent questions” to the Met, which included this zinger: “Could you tell a good picture if it were offered you at anything under $5,000?” (That’s about $66,000 in today’s dollars.)

After being dismissed from The New Yorker, Mr. Pemberton went on to write a cocktails column for Esquire, penning recipes for quite a few drinks. Here’s a simple and elegant one, courtesy of Esquire, called the Batiste:

Shake well with cracked ice, then strain into a chilled cocktail glass.