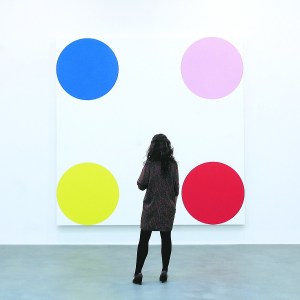 Last week, for the first time ever, a single show opened in all 11 of Larry Gagosian’s galleries, from New York to Geneva to Hong Kong, simultaneously. The show comprises more than 300 of Damien Hirst’s Spot paintings, the world’s most expensive wall paper.

Encompassing a full range of both mass-market and couture shapes and sizes—the portrait, the circle, the Guernica, the right triangle, the Mondrian lozenge—and named after pharmaceuticals, the medical-white canvases are decorated with perfectly round, appealingly candy-color spots, which are usually organized on a square grid that pushes right up to the edges, but are occasionally cut off, especially in the larger sizes, and once or twice are arranged in overlapping, fan-shape mosaic patterns. The colors, although sticking to a narrow, consistent palette, do not strictly repeat in any one painting, and they’re so precisely applied that the spots look like stickers, the kind used for color coding files. Even the white backgrounds stop perfectly short at the edges: These are paintings with hospital corners.

Produced according to a set of conventions that amount to neither an artistic idiom nor even a design concept, but instead constitute a shtick—a clever, easy-to-understand-and-describe, emotionally empty and unchallenging shtick—the paintings are pleasant enough to look at but wouldn’t seem worth talking about except for the fact of their staggering success. Mr. Hirst draws a consistent tide of vitriol, and some of it probably expresses simple resentment at being asked to have a reaction to something so essentially indifferent. Some of it may also be despair at the subtle conceptual problem of acknowledging something as ubiquitous as corporate gray carpeting without conceding it any undue moral or esthetic importance.

But another part of the vitriol is an equally natural resentment of the crushing and soulless domination of money. Painters have always painted wealth according to the standards of their times. Van Eyck put his patrons in expensive fabrics and furs, and those big lacy collars that Rembrandt used weren’t cheap either. Andy Warhol, mascot of industrial democracy, painted the value created by manufacturing and advertising during the long, postwar American boom. What has changed is the kind of money we’re talking about.

Every dot in Mr. Hirst’s paintings, like every dollar bill with a serial number printed on it, is nominally unique, but practically exchangeable for any other dot. Individual paintings have their different shapes and arrangements, but as commodities in a fully financialized, corporatized economy, they aren’t merely exchangeable for some number of dots—they are nothing but some number of dots. Increasingly they’re moving to Asia, but the best of them—with “best” being defined quantitatively—are still in New York: The single painting with the most dots, more than 25,000 of one millimeter each, and the longest painting, at 50 feet, are both hanging in Gagosian’s 21st Street gallery, while the one with the largest spots, at five feet in diameter, is on 24th Street. And they borrow their Pop, Op and Minimalist art historical references for the same reason and in the same way that currency designed and printed with computers is still made to look engraved: because to work as money, money has to look the way most people think money looks.

In Van Eyck’s time, in Rembrandt’s time and even, though to a much lesser degree, in Andy Warhol’s time, money looked like a complex confluence of labor and commodities with social and esthetic values. But President Nixon took the United States off the gold standard, making the dollar a fiat currency, in 1971; and in the 1980s, banks began merging and markets financialized and internationalized; and when, in 1986, Damien Hirst made his first Spot painting, he inaugurated an age of fiat art.